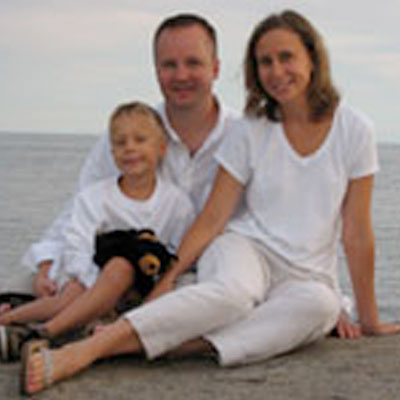 Tricia was diagnosed with bilateral pneumonia, ARDS and sepsis. Doctors reported to her family that she had a 50% chance of survival. Physicians needed to tap into the area around her lungs and drain the huge amounts of fluid that had accumulated. After about eleven days, Tricia’s breathing began to improve and she was brought out of the drug induced coma; she was also extubated. Three hours later, Tricia was moved out of ICU and into a regular room.

Tricia was completely shocked at the loss of muscle and her inability to walk! Before her hospitalization, she had been running four miles a day and working full time. Now, she was unable to walk. Her goal was to walk down the hall and around the nurses station in order to be discharged. Tricia was so depressed. The thought of walking thirty steps was beyond her imagination. But with the support and encouragement of her husband and her kind and generous nurses, Tricia was able to go home two weeks later on October 9, 2007. She was sent home with oxygen which she used for about three weeks.

Six months later, Tricia is concerned about the continued cognitive impairment; her memory has suffered and numbers seem jumbled in her brain. What was once simple has become difficult and frustrating. Sometimes when writing, she omits words, spells them wrong or uses the wrong word. Even when talking, Tricia sometimes confuses words. Also, at night she suffers severe coughing; her throat is irritated and she cannot speak loudly. What is also unsettling is that Tricia often cannot take a deep breath.

Even in light of all this, Tricia is thrilled to be able to enjoy her family and rejoices in the love and support she has received and continues to receive.