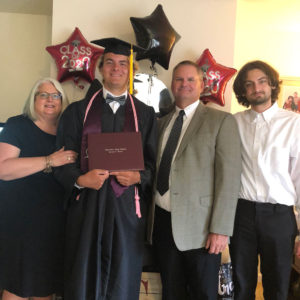 Howard Coleman, a 49-year-old high school teacher from Fredericksburg, Virginia, went to the hospital on December 26, 2017 but did not really know what was going on until late January, 2018. Howard’s wife told him he had been diagnosed with viral pneumonia that resulted in Acute Respiratory Distress Syndrome (ARDS).  What began with only a few white spots on his lungs quickly turned into a total whiteout.  Howard was not expected to live.

Howard spent twenty-six days in the ICU, two different times.  He had to be intubated twice and spent sixteen total days on a ventilator.  While intubated, sixteen hours a day Howard was placed in prone positioning, face down.   During his hospitalization, Howard suffered pancreatitis, dual paralysis of my vocal cords (with one doctor saying he would never talk again), MRSA, a tracheotomy, a feeding tube (he lost 51 pounds), fevers of 105 where he was put on a 39-degree cooling mat to get body temperature down.  The paralytic drugs caused delirium which resulted in many bizarre dreams that felt so real to him.

Finally, after twenty-six days in ICU, Howard was finally extubated; he was very deconditioned.  Initially, he could not talk, which was extremely frustrating.  He could not write for a couple of days.  He worried how he, as a teacher and coach, would be able to do his job.  Slowly he learned to walk again and gain strength, doing physical therapy, occupational therapy, and speech therapy.  After fifty-one days, Howard went home.

Howard was so lucky to have amazing support.  His wife was by his side every day.  His high school and church offered him strength during and since this difficult time.   Howard has slowed down a little bit, but not too much.  He feels he has a greater balance in his life.  He is so grateful to have seen both his son graduate high school and helped coach the Stafford High School baseball team to a State Championship, and he makes sure to enjoy each and every day.  In the future, Howard hopes to run the New York City Marathon!