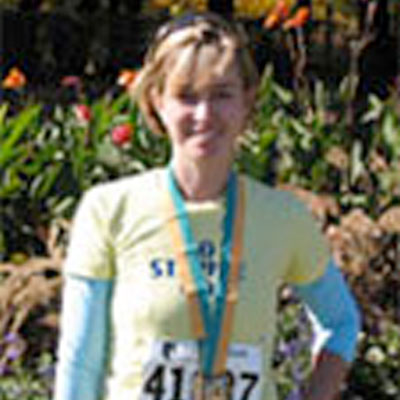 In September, 2003, Stephanie Linebaugh had been training all summer with three other teammates for the 24-hour urban adventure race, The Wild Onion. About a week before the race, Stephanie noticed that she was feeling unusually ill.

Her boyfriend, now husband, Chuck, told twenty-eight year old Stephanie, that she should go to the emergency room. They went to the ER at Illinois Masonic in Chicago, near her home at the time. Stephanie had a fever of 103 degrees. She was examined and she pointed out the numerous scraps, wounds and blisters that she had acquired from her training.

The doctors told Stephanie that they were not concerned with them and sent her home without any blood work. Stephanie was told to take three Advil every 4 hours.

However, the following day, Stephanie was still not feeling well so she went to see a physician at Illinois Masonic’s outpatient facility. Again, she was sent home. Two days later, Stephanie continued to get worse. Her knee was swollen to the point that she was no longer able to walk. She thought she had torn something in my knee during training and planned to see her orthopedic doctor on Monday. But Chuck disagreed and insisted that Stephanie go back to the ER. So again they sat in the ER at Illinois Masonic on a Saturday night.When the doctor finally saw Stephanie, he concluded that she had an infection in her knee; they admitted Stephanie for surgery to drain the infection and reduce the swelling.

The doctors told Chuck to call Stephanie’s family, who live in North Carolina, ASAP, as they were not sure Stephanie would make it through the next 24 hours. She was intubated and put into an induced coma for the next three weeks. That time was like a roller coaster for Stephanie’s family, filled with good days and bad days where they did
not think she would survive.

Stephanie was diagnosed with sepsis from a Group A Strep infection which they suspect entered her bloodstream through a blister on the bottom of her foot. After giving Stephanie hundreds of drugs, her primary infection was under control, but she continued to have secondary infections and eventually pneumonia. Illinois Masonic was able to control her infections, but then, Stephanie was diagnosed with ARDS; she had already been intubated for 21 days.

At this point, Chuck had been doing a lot of research on ARDS and found that Northwestern University was better equipped through their research and the fact there were several doctors from that hospital that were on the Board of the ARDS Foundation. It was decided that Northwestern was where Stephanie needed to be if she was going to survive ARDS.
Stephanie’s first night at Northwestern was another critical time for Stephanie. Since she had been intubated, at that point, for almost twenty-four days, they decided she needed to have a tracheotomy. But before they could trach her, her lungs needed to rest. Also, there was some concern that Stephanie might have nerve damage.

Stephanie was finally able to be trached, but then her doctors did not think they would be able to wean her from the vent. A hospital social worker spoke to Stephanie’s Mom about the need to transfer her to a rehab facility for ventilator patients, but since Stephanie was just transferred to this facility, her mother was quite upset. They had just endured a whole ordeal to have Stephanie transferred to Northwestern and now they wanted to talk about sending her somewhere else. Luckily, three days later, Stephanie was off the ventilator and on her way to a speedy recovery.

Stephanie moved from ICU to a normal room and then, a week later, after five weeks in the hospital, she was on her way home under the care of her Mom and a home nurse who came every other day to change out her antibiotics to her central line. Stephanie weighed 85 lbs when she went home; she went from being a very athletic and independent person to having to relearn how to walk and do day to day tasks and being dependent on everyone.

Physically, Stephanie feels as if she is back to “normal.” The emotional scaring will take longer to heal. She and her family learned a lot through this whole traumatic experience, specifically about the importance of having a medical power of attorney, patient rights and the importance of ARDS education and of course, prayers.

Stephanie lives on the North side of Chicago, with her husband, Chuck.