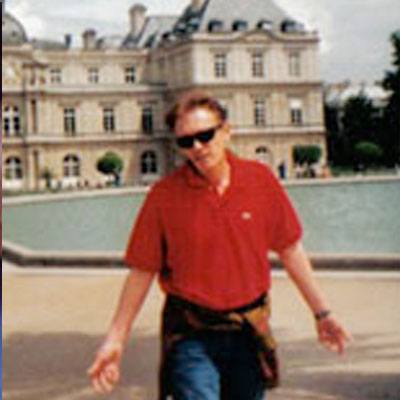 In April 2004, when Stefan Parmenter was diagnosed with Lung Cancer, he thought he might be resistant to the drugs that would treat him. Stefan, at forty-seven years, had been drinking ten pints of Lager and smoked sixty cigarettes every day since his early teens.

On June 29, 2004, Stefan was admitted to London Bridge Hospital, where a part of his lung was removed; within three days, Stefan was diagnosed with ARDS and sent back to ICU. Stefan was intubated and spent the next five weeks on a ventilator. While in ICU, the nurses hosed him down and wrapped wet towels around him in an attempt to lower his core temperature, which was critically high. At one point, Stefan was on fifteen different medications and he had at least one drug he was resistant to, causing more concerns for the physicians.

During that time, Stefan did nothing but hallucinate. He believed Gita, his love, was having an affair with a nurse and also imagined the nurses were being cruel to him. Stefan’s main hallucination was that he and his friend had invented 5th generation software and were being pursued by a syndicate called the Carocel.

Although at times Stefan was lucid, his hallucinations spanned years, he was terribly upset the first time he was alert, as he was told that his mother was at the hospital because he had hallucinated that she had been dead for years.

Stefan finds that to explain to someone who has not experienced this, the difference between a hallucination and a dream/nightmare is extremely difficult. In a dream, when one falls off a tall building, normally that person will wake up before he or she hits the floor; in Stefan’s ‘Hallucination World’ he not only hit the floor, but also felt every bone shattering experience.

After five weeks, Stefan was moved from ICU to the high dependency unit and after a few days, back to his room. But things were still not good; Stefan had no muscles left and was incredibly weak. And he now discovered he was afraid of the dark and also claustrophobic; he has since overcome both of these fears.

Stefan has learned to deal with my ARDS by fighting one problem at a time.

When Stefan still had his chest tubes, and the fluid was not draining, another lung specialist was called in. The specialist decided yet another was required, but Stefan explained he was claustrophobic and went into a panic attack when a surgical mat was put over his face; the specialist proceeded to drill even though Stefan was not anesthetized as his lung had begun to collapse. A very painful experience, notes Stefan.

After a couple weeks, Stefan began to make progress and the chest tubes were removed; Stefan even started going to the pub, accompanied by a nurse and Gita. The doctors thought that getting out would be good for Stefan and the trips were encouraged by the medical staff.

On the funny side, Stefan was Oxygen dependent and a nurse forgot to check the Oxygen can before they went out to a local bar; it ran out and they were ten minutes away from the hospital.
It was decided as soon as he could walk, Stefan could go home!

The following day, the specialist, along with Stefan, concurred that Stefan should go home and fight the infection with an antibiotic. It would take about three weeks for them to know if he beat this latest infection.

Stefan has been home since September 8, 2004, and he is proud to still be here. He no longer smokes. He attributes his survival to the hard work and dedication of the London Bridge Hospital ICU and the love of his ‘other half,’ who stayed with him 24/7.

Stefan says, “I do not think I have beat ARDS or Cancer; this is round one!” Stefan says that the one thing he possesses, which he sees as something he has in common with other survivors, is the sheer determination to keep on living.
Stefan resides in London, with Gita, where he works as at a radio station as a facilities manager.