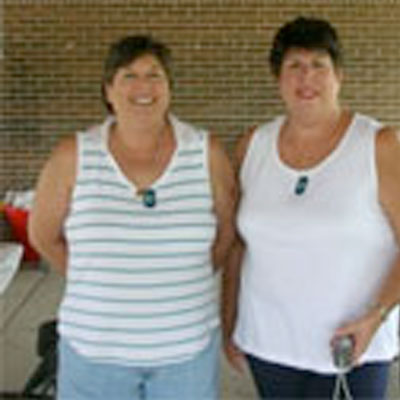 Sarah Beth had just celebrated her 49th birthday on May 16, 2002. She had been eating healthy, walking three to four miles a day, and lost 22 lbs over a period of three months. Sarah Beth felt great!

On the Friday night before Memorial Day, May 24, Sarah Beth started running a low-grade fever, just enough to make her feel lousy, and had a slight cough. The next morning, however, she had a fever of 102.

Sarah Beth had planned to spend the day with her mother, but decided to stay home. An on call doctor said it was likely viral and to take Tylenol and stay hydrated. The fever would go down and then spike back up to 103 degrees.

Sarah Beth’s mother came to stay with her at her house, and then Sarah Beth went to bed. Sunday, Sarah Beth was unable to go to church. Her friend Linda checked on her and called the on call doctor, who told her that same thing he had told Sarah Beth, that it was likely viral. But that night, Sarah Beth could not get out of bed, could not eat or drink.

Sarah Beth was on oxygen and huge doses of antibiotics. At the local hospital, they were unable to draw off the fluid drowning her for fear of puncturing her lungs. By Friday, May 31, 2002, one of the doctors said Sarah Beth’s breathing was so shallow she needed to be on a ventilator. But Sarah Beth’s family began the process of getting her transferred to Vanderbilt University Medical Center in Nashville, even though they knew that there were risks involved.

On June 1, Sarah Beth was transferred. At that time, her family learned that she was in septic shock and had ARDS. Sarah Beth’s kidneys failed on June 4 and dialysis was started. On June 7, Sarah Beth’s family was told how grim her prognosis was. She was put in a drug induced coma. She was morbidly swollen. She had machines, tubes and IVs everywhere. Finally, doctors decided to try Xigris, a drug used to treat sepsis, for about seventy-two hours. During this time, Sarah Beth would improve and then decline but finally she did improve slightly, the swelling went down and she was able to stop dialysis.

On June 26, doctors tried to reduce her morphine but Sarah Beth suffered a seizure and had to be sedated deeply. The seizure was so bad that doctors told Sarah Beth’s family that she might be brain dead. Eventually, on July 2, the ventilator was removed and the morphine stopped.

Sarah Beth has vivid memories of what she calls her “morphine dreams.” Also,
Sarah Beth talks about life BA (Before ARDS) and AA (After ARDS). It is like she had two separate lives. Her IQ is different, her personality is different, and her outlook on life is different. Sarah Beth says that she will never be the same old Sarah Beth that everyone remembers and seems to want her to be. Life is too precious and too short.

Sarah Beth continued physical therapy for six more weeks. Financially, she wanted to get back to work even though she had full benefits with the company she had been with for twenty-seven years.

Sarah Beth started working half days on September 10. Thankfully, she was able to work from home. On October 1, she began to work full time. Two weeks later, due to a reorganization, her workload doubled. Sarah Beth wished someone would have told her to take at least six months off work to recovery fully–no one mentioned what was ahead.

Sarah Beth struggled for the next three years with her job. Since she worked from home, she was able to hide her difficulties. Her organizational skills suffered a tremendous hit. Her concentration ability is almost down to zero. In 2005, Sarah Beth reached thirty years of service and retired. Now she works part time and will begin a new part time job in August, 2006.

Sarah Beth wants people to know more about ARDS and the people it affects. She feels that as a survivor of a syndrome people know little about, many survivors pretend that everything is OK, suppressing post ARDS symptoms and feelings for fear that loved ones as well as medical professionals will not understand.

Sarah Beth would love to hear from others, both in the area she lives as well as online.