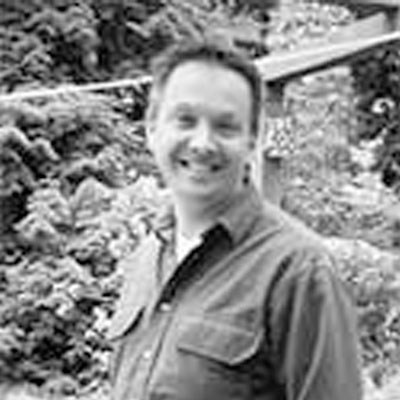 In May 2001, 41 year old Patrick Cuff had an accident. He was 35 feet up in a tree when a large piece he was cutting fell the wrong way and took him with it. It was a 500 lb piece that Patrick’s brother lifted off him, simultaneously pulling Patrick out of the way.

Patrick was taken to Harborview Medical Center in Seattle with a punctured lung, broken ribs and soreness. He was in the hospital for four days during which time he had thought that those were the worst of his medical concerns. But on that fourth day, Patrick developed ARDS. He was taken to the ICU, ventilated, put on a roto-bed and strapped in tightly. Patrick was on the vent for three weeks. He remained in the hospital for seven days after he came off the vent.

During that time, he recalls a series of dreams. The most memorable was one where his brother (who was with him when he fell out of the tree) and he had just come through a mechanical maze and were surrounded by a four foot high chain link fence. There were a couple hospital orderlies talking badly about me but Patrick could not get up; he was exhausted. The exhaustion, not being able to move and being hot related, he believed, to being tied down on a rotating bed and having a fever.

In the dream, Patrick remembers a question being posited to him: “Do you want to live? If you do you have to get up and fight.”

Patrick was never saw himself as a person with a strong will to live. But Patrick realized that this is what he would need and he started swinging at the two ill speaking orderlies. He cannot say if it happened simultaneously, but in the ICU unit, the nurses had untied Patrick to clean him. At that time, he went berserk, pulling tubes out and swinging like a mad man. Patrick believes that this event was pivotal in his life: Patrick had to fight for his life.

Since he was in good shape when the accident occurred, Patrick’s recovery was not too bad. Right now, he is back in school, applying to nursing schools. Patrick has always wanted to work in the health care field; now he feels the time is right for him to embark on this career of helping others as others helped him.
In every cloud-if you look-there is a silver lining.