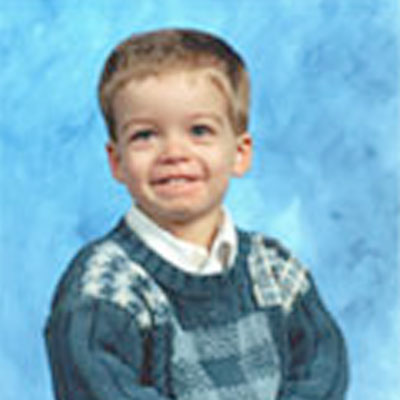 Nathaniel Adamczyk was born in January 2002. He was a happy, vibrant and healthy young boy who loved animals, trucks, and Elmo. He was bilingual, speaking both English and Spanish. He attended Montessori School, where he fed his young appetite for learning. By the time he was just 18 months old, Nathaniel already knew his alphabet, colors, letters, numbers, and shapes – all in two languages.
In April 2004, when Nathaniel was just 2 years old, he developed a fever one Friday morning. He had minor cold symptoms for a couple weeks prior, but nothing that concerned us. The fever however prompted a visit to his pediatrician, who found that his spleen was enlarged indicating that he may have mono. The doctor told his parents to expect him to be feverish and lethargic all weekend, and to come back for a follow-up on Tuesday. At that time, test results would confirm what exactly he had and an appropriate medication would be prescribed.

All weekend, Nathaniel was exactly as his doctor suspected: feverish and lethargic. He sat around watching movies and napping all day long. As the weekend progressed, he seemed more and more uncomfortable, unable to rest, coughing more, etc. Monday, his pediatrician was updated on his condition, but everything was as expected for mono.

That night, Nathaniel had a fitful sleep. He just could not get any rest. At one point, he was having trouble breathing. His family brought him to the local ER, where a team of doctors descended upon him. They soon came back with the report: mono, pneumococcal pneumonia, collapsed left lung, septic shock. Just 3 days after seeing his pediatrician, the diagnosis was ARDS.
Nathaniel was transferred by ambulance to a local pediatric center and was admitted to the ICU. He was taken to Children’s Hospital of Philadelphia; Nathaniel and his family checked in for a long hospital stay.

The first decision was whether or not to intubate. The doctors preferred not to intubate, but rather to have him rest and heal on his own, with heavy doses of antibiotics. But it is difficult to keep a 2 year old still. He was getting agitated, trying to pull at his IV’s and making himself worse in the process. So after nearly 2 days in the ICU, Nathaniel was intubated. The struggling was over, and he lay peacefully asleep while the doctors tried to hurry his lungs towards healing.

But his lungs were not healing. In fact they were getting worse. The right lung by now had also become completely full of fluid. He was developing pneumothoraxes and required two chest tubes. He was switched from a ventilator to an oscillator, but still he was not getting enough oxygen in his blood. The doctors then mentioned “ECMO.”

Nathaniel was on ECMO for nine “roller coaster” days. Some days were good, all the numbers read as they were supposed to but other days were not so good, and the doctors stayed for hours managing medications, ventilator settings, controlling blood pressure or fluid retention. On the 9th day, finally came a ray of hope. Nathaniel’s X-ray showed a small patch of air in his bronchial tubes where previously there had been fluid. This was the first sign that he was on his way to recovery but they just had to wait it out.

Then came another down swing in numbers. Doctors filled his room to manage what they thought was a fluid issue. But a nurse checked his pupils and found them dilated, a sign of bleeding in the brain. Nathaniel’s family had been told of this risk, since anticoagulants are used extensively with ECMO to prevent clotting in the machinery. But here it was, the worst case scenario.

A few hours later, a cat scan of the brain showed an enormous hemorrhage in the front left 25% of his brain. We had to decide what to do. The choice was painful but clear. This was no longer our Nathaniel. They would have to let him go. Nathaniel died May 10, 2004 at the age of 2 years 3 months and 11 days.

Nathaniel is survived by his mother, Iris Melendez, his father, Hank Adamczyk, and his baby brother, Dylan Adamczyk.