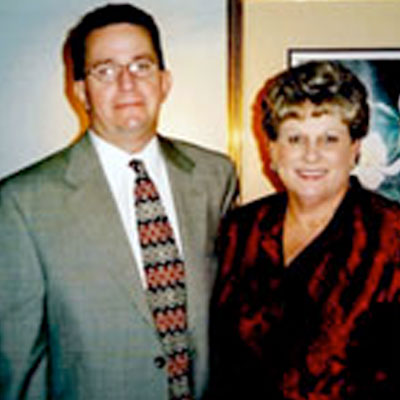 Mike is a Miracle Man. If anyone does not believe in prayer, they had better take a long look at Deborah’s husband, Mike, because he is truly a Miracle!!!!

Mike and Deborah went to Duke on August 15, 2004 in order for Mike to have elective procedure to correct his atrial fibrillation. He had several cardio conversions before this and they just did not seem to correct his problem. Medications were also unsuccessful. The last option was to have an ablation done to Mike’s heart. The procedure was to be performed on August 17, 2004 and Mike was to return home the following day.

Mike was full of energy when he came back to the room. That afternoon, Mike and Deborah walked the halls and waited for the Doctor to discharge Mike. However, the doctor requested that Mike spend one more night at the hospital so they could make sure he had the proper dosage of heart medication before traveling back to Greenville, SC.

They thought, “only one more day,” and did not fight the request. Deborah stayed at a motel across the street, getting much needed rest before the drive home to Greenville, SC.

When she arrived at the hospital the next morning at 6:00 A.M., Mike said that he felt like he had the flu. Both brushed it off because they were told that Mike would probably feel like a truck had hit him for a couple of weeks. But Mike seemed more sluggish than normal. Still, he pushed himself because he was ready to go home. Mike’s doctor checked Mike and said he needed a chest x-ray and VQ Scan; his lungs seemed to have a little fluid.

They wanted to make sure everything was okay. Although the x-ray could be done on Friday afternoon, the Scan could not be done until Saturday. “One more night”. Deborah left Mike at 2:00 A.M. Saturday to get a little sleep so she could make the drive home after the test.

When Deborah arrived at the hospital at 7:00 A.M. Saturday, Mike’s oxygen level was at 56. At 9:00 A.M. Mike was taken for the VQ Scan. Mike looked really bad and Deborah had no idea at the time that though Mike was conscious, he was really out of it. As soon as Mike laid flat on the table for the test, he started complaining that he could not breathe.

Deborah watched every move that he was making. The technician tried to coach him to lay “just a little longer” until finally he told her that he had to get up. When he rose, he called to Deborah and began coughing up blood. Suddenly, Mike was rushed to the Cardiac Care Unit.

Deborah was told that Mike needed a tube down his throat because he could not breathe. Deborah was still thinking that “everything’s going to be okay because God couldn’t possibly take Mike away from me.”

Deborah called her Mama and told her to “start praying.” Deborah called their son, Michael, who lives in San Francisco and told him to catch the first flight to Raleigh. Those were difficult phone calls for Deborah. She knew Mike was in God’s hands even though the Doctors were doing everything for him.

When Deborah got to the seventh floor, the physicians told her that Mike’s lungs had completely shut down and they did not expect him to survive the night. Mike had ARDS (Acute Respiratory Distress Syndrome). Deborah wondered, “HOW COULD THIS BE?” Mike was in a paralyzed coma and on life support. Deborah said that to see her husband, so helpless, was the worst day of her life.

Mike stayed in a coma for thirty days. It was touch and go the first few days after Mike was out of the coma. Mike could not answer simple questions and that was a concern. However, Mike knew Deborah, when he saw her, he pulled her hand to his mouth and kissed it. Deborah knew then that no matter what God handed them, they could handle. Deborah had her husband back.

When Mike really woke up, he skyrocketed!! Every day, the Doctors would shake their heads and say “Unbelievable.” Mike passed everyone’s expectations.

Mike is still weak but getting stronger every day. Deborah told Mike what all of their friends and family did while he was hospitalized. All he can say is “Unbelievable.” They had prayer chains going from all over this world and that is what kept Mike fighting.

Mike went back to work part-time on December 6th. On January 3, 2005, he begins work full-time. He has come such a long way.

Mike is a living MIRACLE!! No one knows how many days are left on this earth, but Mike and Deborah have both learned through this that we must praise God every day for each day he has given them, for there may not be a tomorrow. Deborah says, “Please continue to keep us in your prayers.”