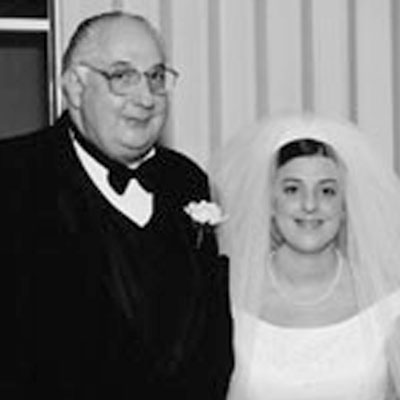 Jolene Troia’s father, Mel Johnson who lives in southern Wisconsin, is a large man, 6’5, 300 pounds, with a great big heart. Good thing it is a very strong heart as well!

On July 31, 2003, Mel had bypass surgery to correct 5 blockages in his heart. He appeared to be recovering fine, walking in just a few days. Other than having atrial fibrillation, he was doing fine. He was started on a drug called amiodarone for the arrhythmia.

Then he began having difficulty breathing. The nurses and even some of the doctors tried to tell us he was just feeling “anxious” and that it was all in his head. Soon after, they made him get up to walk and his blood pressure dropped very low. He was back in ICU and they thought he had a blood clot in his lung. This was not the case. In a few days, he was back on the regular surgical floor, but again was having difficulty breathing.

Again his family was given the run around and ignored by doctors and nurses. A week went by and Mel just kept getting worse. Finally, they discovered he had over one liter of fluid that had collected around his heart! He was raced back into surgery that day. No one dreamt what was in store for him.

After the surgery, our family was told he was recovering well. But, a few days later, he was still in a drug induced coma and on the ventilator. He began to look puffy and swollen. His condition continued for days and the family was told that he had pneumonia.

Mel continued to swell up and gradually his kidneys could not get rid of all the excess fluid on board his body. The physicians decided to try “prisma” which is similar to dialysis and would help Mel’s kidneys to get rid of the fluid. It worked briefly. His breathing continued to get worse and he was so swollen they could hardly get any of the IVs into his veins. At one point, Mel’s body weight was up 50 pounds in fluids. His eyelids were puffy; his hands felt like water balloons.

Mel’s family decided his body had been through enough and put a DNR order although his heart was the one organ that appeared to never fail him. His lungs and kidneys were were not doing well. Finally, the pulmonologist told the family that he thought Mel had a condition called ARDS. He explained that the drug, Amiodarone, had poorly interacted with the anesthesia used during the 2nd surgery to remove the fluid off his heart. Mel had what was known as “Amiodarone Induced ARDS.”

Mel’s family learned that he had a 10-30% chance to live based on the condition of his lungs and kidneys. Jolene remembers praying to God that “if he was going to die anyway, to please let him just die today so he doesn’t have to suffer.” But God had other plans! Luckily, the pulmonologist recognized his condition and began pumping high doses of steroids. At this point, Mel required full fledged dialysis and slowly, over days and days, his condition began to improve.

After weeks, he improved enough so that they could slowly begin waking him up. When Mel did not wake, this frightened the family. When he finally did, his movements were agitated and his hands were fisted and they began to question whether he had incurred brain damage. Jolene remembers driving to the hospital early one morning determined to meet with a neurologist and hearing the song “Calling All Angels” by Train on the radio. She was inspired and felt that somehow her father would pull through.

Jolene thought, “I need a sign, to let me know you’re here” and she got her sign when she arrived at the hospital that day. Mel’s hands were skinny and he was moving them quite normally! He was pulling himself up with the bedrails. His hands trembled but he was moving them. And he was nodding yes and no to questions and overall, her father looked much better. “I won’t give up if you won’t give up” she told him and she told him about the song she had heard.

The months following were difficult but changed her life forever. Mel spent over 8 weeks in that drug induced coma. He was on the ventilator for over 12 weeks. The first time Mel spoke, he could hardly stop!

Mel did not get released from the hospital until late Fall and then he went straight to Rehab. After a few days, an infection in his sternum sent him back for more surgery. After that, Mel returned to Rehab and finally he was allowed to come home for the first time shortly before Christmas. Therapies continued in his home for weeks. In the Spring of 2004, Mel had his gallbladder removed and even almost one year later, Mel still has a bedsore on his heel from lying in that awful coma. Although his endurance and strength are low, Mel is a survivor and he has one hell of a strong heart!