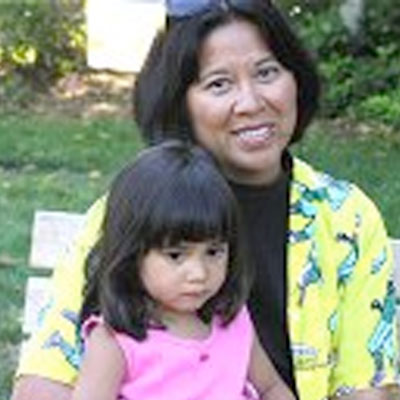 Before her illness, Meg was an active, healthy mother who balanced her time between taking care of her toddler son and working as a cultural diversity trainer, software trainer and on-camera spokesperson. She had been an active member of the Seattle theatre community, performing in professional stage productions and touring the Northwest with two different diversity theatre companies. She and her husband Tom spent their spare time sailing, downhill skiing, playing tennis and making music.

Then on December 28, 1998, their lives changed forever. Meg had been admitted to Swedish Hospital in Seattle five weeks earlier due to complications in her pregnancy. She was ordered to go on complete bed rest until her daughter’s lungs were mature enough to function on their own after she was born. Karina was delivered by C-section that night. Meg was relieved to finally be going home after five long weeks in the hospital.

Forty-five minutes after the delivery, Meg started gasping for breath. Her blood pressure plummeted and she went into cardiac arrest. A team of doctors, nurses, respiratory therapists, pharmacists and other support people worked frantically to save Meg’s life.

She was finally resuscitated after 45 minutes of CPR and defibrillation. This was just the beginning of her long, arduous journey into the nightmare of ARDS (Acute Respiratory Distress Syndrome) and DIC (Disseminated Intravascular Coagulopathy).

It took many weeks for the doctors to finally determine the cause of all Meg’s problems. She had suffered an Amniotic Fluid Embolism, a rare condition in which amniotic fluid enters into the bloodstream and usually is fatal. ARDS and DIC are just two of the critical, and usually fatal conditions that resulted from the embolism.

Meg also suffered kidney failure, which necessitated daily dialysis, liver failure, which caused jaundice, and sepsis. She spent more than two months in the Intensive Care Unit on a ventilator. She was initially intubated, and then a tracheotomy was performed after about three weeks.

She ruptured an artery in her abdominal wall that resulted in a huge abdominal hematoma. Because of the size of the hematoma, her diaphragm pushed up into her lungs, and it exacerbated her breathing problems. The hematoma has reabsorbed quite a bit, but even after two-and-a-half years, she still looks pregnant because of it.

Meg miraculously survived despite the odds. But once she was off the ventilator it took many more months in physical therapy to regain her ability to walk and take care of herself.
She left the hospital more than five months later. At that point, she was only able to do basic daily activities. But she continued physical therapy for about fifteen months, first as a hospital outpatient, then at a health club. She has since graduated from a walker to a cane to walking on her own.