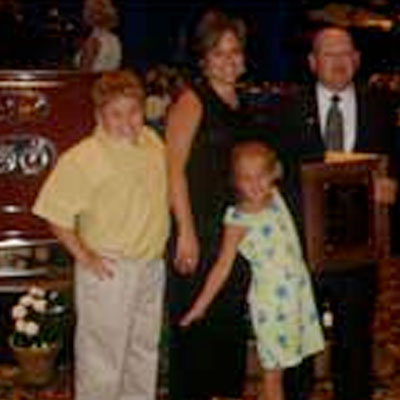 On June 8th, 2005, thirty-seven year old Mechelle, began to feel like she had the flu. She came home from work, took a hot bath and went to bed. On Thursday, the 9th, she was so ill that she could not get out of bed.

Her husband, Chris, kept insisting that Mechelle go to the doctor, but she had felt like this before and thought she would be OK. The next day, she called her mother as her husband was at work. She felt much worse.

Mechelle’s mother took her to the doctor where she learned that she had 105 degree fever and blood in her urine. Mechelle went to the hospital for IV antibiotics and was admitted.

Although she had every imaginable test, no cause for the infection was discovered. They said she was the healthiest sick person in the hospital. But that was soon going to change…

On Tuesday, before a scheduled spinal tap, Mechelle developed breathing problems. After changing her O2 delivery and giving her breathing treatments all day with no improvement, she was transferred to Post Intensive Care for closer monitoring.

On Wednesday, at about 2 AM, Mechelle’s breathing was so bad she could barely tell her husband to get her help. She was ventilated and at around 5 AM, her blood pressure was extremely low; she was transferred to the ICU.

The doctors knew immediately that Mechelle had ARDS and her family was given little hope. She had a total white out in both lungs. She was on the vent for ten days and that day, the doctors were going to do a tracheotomy; somehow she awoke and told them to take the tube out!

Two days later, Mechelle was in a private room and the following Tuesday, she was home. One doctor said that Mechelle’s ARDS was due to pancreatitis but another was not convinced. Currently, Mechelle is facing swelling with her liver and trying to find out why this is happening.

Mechelle’s husband kept a journal while she was hospitalized. Mechelle cherishes this as she feels as though she has been able to get a part of that time back by being able to read about what was going on with her and her loved ones.

Mechelle, her husband Chris, and children Travis and Lanie, live in North Carolina.