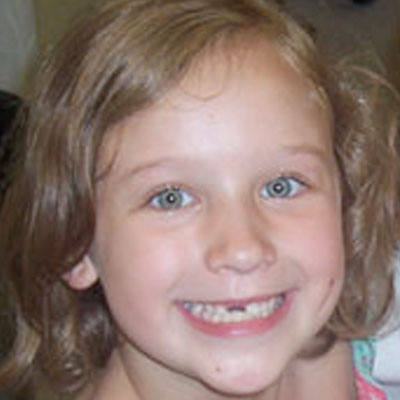 Mary is the youngest of four daughters, born on May 21, 1999. As the youngest, she was always in a position to have to fight–for time, to be heard, to catch up and to be respected. Mary learned to fight and win the battle of her life in March, 2000, at the age of ten months.

On a Saturday in March, Michelle was helping her three older girls to attend a movie premier with their father. Michelle was curling the girls hair but unfortunately, the baby managed to crawl too close and pull the curling iron down so, burning her leg.

A 2nd degree burn was confirmed by a pediatrician and daily visits to his office became routine that next week. But 5 days after the burn, Mary was sitting up next to the bed and her nostrils were flaring. Michelle took Mary into the doctor, who did a chest x-ray and concluded that Mary had pneumonia. Due to a pulse ox score in the 80’s he hospitalized her immediately.

Mary spent the next 24 hours in Antelope Valley Hospital, taking antibiotics, breathing treatments and some oxygen. She was happy, playful and energetic. Within 24 hours, and after walking up and down the halls with her IV, Mary was ready to go home. Her physician said that if she continued to do that well, he would consider sending her home. The family was elated. Their elation was short lived.

Within hours, Mary took a turn for the worse. Her breathing becoming more and more labored and she was put back on oxygen. Doctors ordered an arterial blood gas testing.

The doctor told the family that the results were not good and that he wanted Mary airlifted and transferred to UCLA as soon as possible. The trauma team from UCLA arrived, Mary was intubated; she was in renal and pulmonary failure.

Mary spent almost 2 weeks in the PICU unit at UCLA in a medicated coma, receiving life support. She had more wires and tubes then Michelle had ever seen outside of an episode of ER. Bacterial and viral panels were negative. Endoscopies were inconclusive. The family was told that she was suffering from ARDS, but not told why it happened. Mary crashed five times. She lost four pounds. She was suffering and Michelle found it too difficult to sit by and watch. She prayed for her baby.

Mary was so critically ill that Michelle called for a priest to administer the last rites. They said good-bye.
The next morning, Mary was still alive and by some miracle, she survived. A few days later, Mary was being weaned from the ventilator and was being prepared to be slowly awakened from her medicated coma. Michelle will never forget how large her eyes looked the first time that she looked up from that bed. She will never forget how the first thing she reached for was the bill of her father’s baseball cap. Michelle will always everything about the day she watched her daughter reenter this world for a 2nd time.

Mary came home with Ativan and Methadone. She had a difficult time being weaned from her medication but gradually she weaned from the medications, relearned to walk and gained back the weight.

Today Mary is a loud, dynamic and energetic 7 year old. Michelle says that she is the light of my life. “I love all of my children deeply and differently but Mary has a little ‘bit of something extra special.’” Michelle said that maybe this is because she was able to experience her birth twice.

Mary suffered from delayed speech, but she really sounds like most other 7 year old. She has received speech therapy since the age of 4 and has made remarkable progress.

Mary is a joy to all who know and love her. Michelle wants to share their story with others so that people know when things are at their worst, when it seems all home has faded and is gone, a miracle can happen. Just look at Mary.