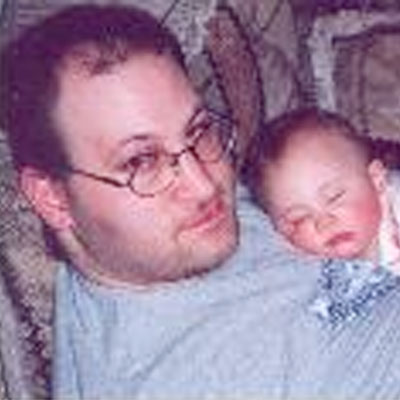 Mark Kardasz, survived by Susan – The World Is a Much Poorer Place…

On February 20, 2004, thirty-three year old Mark Kardasz felt like he had a cold and a cough coupled with severe back pain. The following day, he went to the ER, where Mark was told that he had pneumonia; he was sent him home with zythromax. He spent February 21st and 22nd at home feeling terrible, he was pale and sweaty, coughing and in severe pain. His family never imagined how sick he really was.

On February 23, 2004, Susan, Mark’s wife of six years, went to take him to their doctor, but Mark started falling down, his speech was slurred and his eyes looked funny. Susan called an ambulance instead and Mark was taken to Mercer Medical Center in Trenton, NJ. They admitted him to ICU.

While in the ICU, none of the antibiotics worked and everything that Mark was tested for came back negative. On February 26th, Mark seemed a little better, but later that night they had to put him on the respirator. The following day, Mark’s doctor said that he felt it best to move him to Philly, so Mark was transferred to the University of Pennsylvania in Philadelphia.

That is when Susan and the family was first told that Mark had ARDS. They were hopeful for Mark due to his age and because Mark had no other medical problems prior to getting ARDS. While in Philadelphia, Mark was on the respirator and heavily sedated. Only for the first day was on a paralytic. During his time there, the staff was able to get Mark down to 50% oxygen, and he remained in the same condition his entire stay there, still with ongoing fevers and no significant change in his condition. However, antibiotics did not seem to help, and anything tested for came back negative. Mark was otherwise was healthy with no prior medical conditions except for epilepsy. The doctors kept searching to see if there was anything else underlying this all, but found nothing.

Then on March 6th, everything changed. Mark went back on the paralytic and up to 100% oxygen. Late that night, Susan received a call that said that Mark had taken a turn for the worse. He was coughing even though on the paralytic and they could not get enough oxygen in him and were using the bag on him. They were trying to maintain his blood pressure and O2 saturation. But it quickly kept worsening, and in a matter of hours, Mark then lost his battle.
He passed away at 2:25 AM on his 34th birthday.

Mark A. Kardasz leaves behind wife, Susan, of six years, his three year old daughter and sixteen month old twins.
Mark was many things to many people, a son, brother, husband, but most of all, he was a wonderful and loving father to his children who, sadly, he did not get an opportunity to bid farewell. He will be missed. The world is a poorer place…