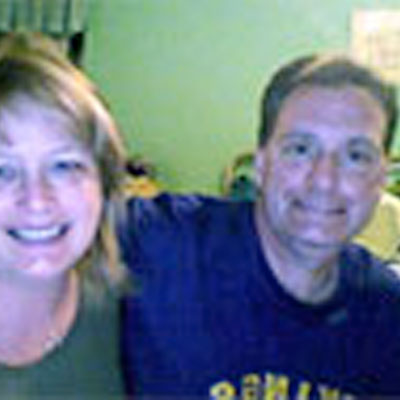 On the morning of December 23, 2005, Lynn found her 44 year old husband, Mark, unconscious and barely breathing. He had complained of being tired when he went to bed the night before and thought he was coming down with a cold.

EMS arrived, intubated him and transported him to the closest hospital. They placed him on a ventilator in ICU and told Lynn that he appeared septic and had fluid in the lungs. The first 2 days he was able to open his eyes and nod. By the third day, he was totally unconscious. No one mentioned anything other than pneumonia.

Lynn had heard of ARDS and asked the nurses, “What happens if he gets ARDS?” Lynn was told, “Get ARDS? He has had ARDS for 2 days.”

Lynn did some research and found that there was some evidence that proning might help patients in their beginning stages of ARDS. Lynn asked the doctor to get a bed to turn him up side down and explained what she learned about the roto-prone bed she had seen. Though Mark’s doctor was not convinced, he relented and ordered the bed.

To use the bed, there had to be a one to one nurse ratio at all times. The company representatives stayed all shifts to make certain everyone was trained. The bed automatically turned Mark to 6 different positions. He instantly went from 100% to 50% on the vent when up side down! Fluid drained from his mouth and nose which they explained was from the lungs. When ever he was turned right side up, the vent pressure had to be increased so they kept him up side down for most of the shift. There were risks involved, including eye orbital pressure and changes in eye sight but since Lynn had been given no hope, this was an option that gave them hope.

Mark was in lung, kidney and liver failure. After a week in the bed Lynn saw the
lungs improve slightly.

Mark also had a trach g-tube to feed directly to the stomach to help from aspiration.  Mark was in a coma while in the prone bed for seven 7 days. Once he started improving, they put him in a regular bed and then had to use Nimbex to keep him paralyzed so that he would not fight the vent.

Lynn had to remind medical staff frequently that he could hear but not move and to keep all comments positive. His only memories during this time were of a “beach,” which Lynn had spoke of going to often while Mark was in the coma, and a “round house” which was probably the roto-prone bed.

Mark spent 32 days in intensive care, 4 in a step down unit and 5 on the floor. Mark came home and had in home therapy for 3 weeks and then out patient physical therapy for 3 more weeks. Mark started going back to work for a few hours a day within 4 weeks home. Although he is still very tired and has muscle weakness, Mark has made tremendous progress.

Mark’s chest x-rays, taken in April, 2006, showed no scaring of any kind in the lungs and his lung capacity is normal. Though Mark had to have a large increase in the strength of glasses, Lynn is so glad that he is here. Mark has an increased anxiety level and is very quiet at times post ARDS. Mark and Lynn feel that the roto-prone bed made all the difference. We may not ever know but so many of the hospital staff told us that our Miracle Man would not be there if we did not get the bed. Click here to see photo of Roto Prone Bed here