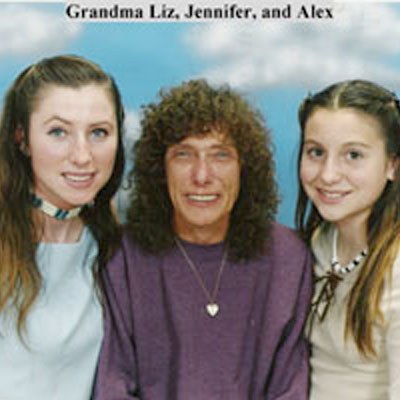 Elizabeth I. Ball, fifty-four years old, attended a wedding in on November 2, 2002. She was having acute stomach pain. While driving home the next day, Lizzy was cramping the entire time. When she got home, she began to throw up and she was doubled over in pain. Her family decided to take Lizzy to the hospital, Novato Community Hospital in Novato, California. She remembers the doctor gave her some sort of barium to drink for the cat scan. The doctors found nothing.

They decided to do exploratory surgery, and this is when Lizzy was first diagnosed with colon cancer. They later learned that the cancer had spread to her ovaries, uteri glands and into her lymph nodes. The doctors said that Lizzy was terminal. She was not expected to live through the night. But Lizzy did… However, it was during her surgery that Lizzy developed ARDS. The specifics of the ARDS are hazy for, but were typically ARDS.

She was in ICU for 2 weeks, and then she was transferred to a medical room, as they thought she had improved. But Lizzy had not. Back to the ICU. Lizzy does not know exactly how long she was in the ICU the second time, at least four weeks, but when she awoke, she was in a large room which was full of people…standing room only!

Lizzy remembers telling a nurse to send her home, that she did not want to die in the cold hospital room, that she would rather die at home. They sent Lizzy home with at home hospice.

A week later, Lizzy’s daughter asked a Lutheran Preacher, and she read Lizzy her last rights. Three days later, Lizzy awoke! Another miracle. At first, Lizzy was angry to be brought back to what she saw as a world of hell, CANCER. Terminal CANCER.

She felt depressed watching her family grieve for her. Nothing she could say or do could possible make them feel. All Lizzy could do is say “I love you” and wipe their tear stained face, give hugs and hold them until everyone stopped crying.

Hospice stayed with Lizzy for a month; they saw she was getting better and released her. Lizzy was their miracle child. After Lizzy got enough strength back, she went to Kaiser to see her oncologist. She had a new treatment she wanted to try on Lizzy. What did she have to lose?

After going through ten months of chemotherapy, Lizzy had another cat scan and she was told that the cancer had totally disappeared. What a day that was. Everyone cried and held each. Lizzy was relieved. She decided to take a vacation and spend time with her family. She spent time in Idaho.

Lizzy was sick for around 2 weeks and went to the hospital there, and they found a nodule on my lung. When Lizzy returned from my vacation, she went and saw her oncologist, who gave her a pet scan and cat scan. The cancer had moved to her lungs. Lizzy had to wait for three months before they could do any surgery or more chemotherapy.

So, three months from now, Lizzy will be back in chemo and go through more hell. But since she is in the business of miracles, she is not ready to give up. Lizzy says that she is, “high on life and enjoying the time I have to spend with my family and friends.” Lizzy says that this is most of her story … stay tuned!