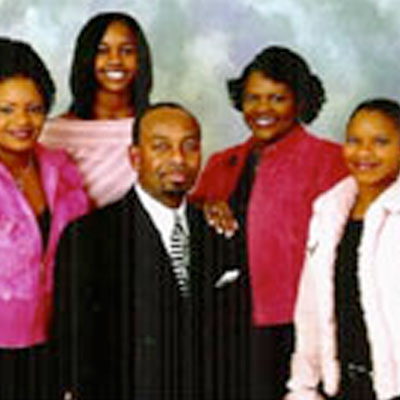 Karen’s story begins in April, 2000 when she was forty-two years old. Karen was the President of her children’s high school PTA and was having a meeting at her home. As a nurse epidemiologist for the Army, Karen was called during the meeting by her boss to meet her in the ER because soldiers were vomiting everywhere. So begins Karen’s saga.
When she arrived home that night, Karen’s temperature was 102. She recalls that she was not feeling too well during the meeting, so she knew that the disease investigation had nothing to do with her illness. The soldiers had been contaminated in the dining facility.

The next morning, Karen was scheduled to fly to New Orleans, to represent her sorority, Alpha Kappa Alpha, at a regional convention. Karen flew home Easter Sunday very short of breath. She had an x-ray the next day and it showed pneumonia in the left lobe. Karen’s doctor prescribed Azithromycin for ten days and though she felt a little better, Karen did not feel close to one hundred percent.

After that, her doctor changed her to another and also added prednisone and with that, Karen’s breathing improved. However, when this treatment was finished, Karen began to feel poorly again.
On May 17th, Karen told her husband, Rez, that she needed to go to the hospital. Her physician sent her to a pulmonologist, where Karen learned that her pulse ox was 80. She sensed need for concern when the chief and assistant chief of pulmonology came in the room after being summoned by the technician.

That was a Wednesday; the following day, Karen was set up for a lung biopsy because the blood work did not show any infectious agents. By Sunday of that week, the week before Memorial Day, Karen was on a ventilator after suffering barotraumas during the procedure, and in a drug-induced coma. She had four chest tubes, among the rest of ARDS apparatus. During insertion of the chest tube, an artery was severed and Karen ended up in the OR for an emergency thoracotomy to stop the bleeding.

Karen woke up the third week in June in time for her husband’s birthday. By this time, she was “out of the woods.” She had a multitude of prayers from her friends and church members where she was very active in the children’s church ministry. Karen remained in ICU until July 6th and was transferred to a rehab hospital until the 28th of July. Karen was discharged on oxygen, and learned to walk with a walker. For six month, Karen remained on oxygen, regaining strength day by day. All in all, Karen was on the vent about 5 weeks and in the ICU 7 and 1/2 weeks and in rehab for 3 1/2 weeks.

Post ARDS, Karen is dealing mostly with the fatigue, polyneuropathy and PTSD. She had to stop working in August. She also has family members who lived through the ordeal and do not understand why she still needs talk about it. “How many people do you know that have been a survivor of a modern day miracle? God saved my life and I am grateful, but sometimes it is so sad not being who I was, which I thought was bright, witty, fun-loving-hey that is still me!”

Currently, Karen lives in Texas with her husband, Rex, and is mother to twin daughters, Veronica and Valerie, 20 and seventeen year old daughter, Nicole.