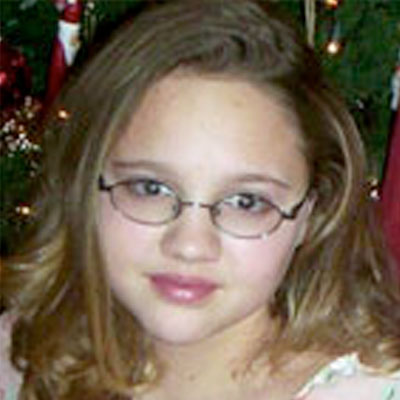 On Saturday, Feb. 8, 2003, Jessica woke up complaining of being dizzy. She said the room was spinning.

Her mom, Julie got out of bed and took her temperature; it was 104.7 and climbing. Several hours, Motrin and 2 tepid baths later Julie thought her fever started to break. By Monday afternoon, Julie called her doctor as Jessica was getting dehydrated. Jessica was taken to the hospital and she started to perk up by the time they went home, after receiving IV fluids.

On Wednesday Jessica was taken to see her doctor. Jessica had pneumonia and was so sick she collapsed in the hallway of the building going to the doctor‘s office. The doctor took some x-rays and prescribed antibiotics.

On Thursday morning, Jessica’s parents woke up at 3:30 AM because of her breathing. Jessica said that she felt like she had just got done running, meaning she felt ‘out of breath.’ Jessica went back to the hospital.

At the Emergency Department, the Physician Assistant thought he would give her a shot of antibiotics and send her home, but the nurse was unable to get an oxygen level during vital signs so they put 2 liters of oxygen on her and drew blood for an Artirial Blood Gas. Jessica’s O2 level was 54%.

Jessica was admitted the MED/SURG floor of the hospital; the hospital did not have a pediatric floor. Slowly, her sats were above 87%. For 8-10hours Jessica‘s oxygen dependency continued to increase util she was using a non-rebreather mask, but then slowly she started to improve.

By Friday morning, she was sitting in bed coloring after breakfast with only a nasal canula for oxygen. Through the day, Jessica got slightly worse, but not drastically.
During that night, Jessica went downhill. Julie called Brad at about 6:00 AM and told him that Jessica would be transferred to Wichita. (60 miles away.) In the ambulance, Jessica continued to decline. That evening, at 6:00 PM, one week after originally waking with a fever, Jessica was intubated and placed on a ventilator. For the next six days Jessica battled a fever of 103-104F wrapped in a cooling blanket. Her skin was like ice to the touch, but her core temp would not come down. She was on 100% of oxygen for more than 36 hours. After 48 hrs of 100%, the physicians said that her lungs would be burnt even if she did survive.

Monday, the second day after she was placed on the ventilator her parents, Julie and Brad were told that Jessica had ARDS. Tuesday morning, Jessica received her first chest tube. Wednesday morning she needed her second chest tube. The doctor felt that ECMO was her last hope. He explained it is a bypass machine to oxygenate her blood and give her lungs a chance to recover. Finally a hospital that did ECMO on children her size was found, but this was not without complications as the transport was risky and ventilation methods would have to change.

With prayers, Jessica was able to tolerate the change from the special ventilator she was on to the ventilator for transport, but the fixed wing crew was fogged in at the Arkansas airport. Thursday, Feb. 20th at about noon Jessica was taken from Wichita, Kansas to Arkansas Children’s Hospital (ACH). They called it a very “therapeutic flight” as Jessica didn’t need ECMO or even the oscillator ventilator once arriving at ACH.

In Arkansas, Jessica needed two more chest tubes. Each day, Julie and Brad prayed she would make it though another day, as her face swelled because of all the subcutaneous air that escaped from the holes in her lungs. Finally, Jessica began to improve. “The doctor told us we should give God ALL of the credit, because they could not explain why she started to get better as quickly as she did.”

During the next few weeks, Jessica continued to improve. She was extubated on March 16th, after four weeks. On March 21, they flew back to Wichita. Julie and Brad’s sons came back from Alabama, where they had been staying with an aunt and uncle family.

On March 28th, Jessica went home but less than 36 hours later, she seized from withdrawal. She was on Ativan and Methadone to control symptoms from narcotic withdrawal. Though she had been weaning off the Ativan in the hospital, Jessica was sent home without Ativan, which caused the seizure. Two days later, Jessica was back home on a very slow Ativan/Methadone taper.

The next few weeks were filled with careful monitoring and physical therapy to help Jessica regain enough strength to walk again, and eventually run. She had a tutor through the summer and in August; Jessica was able to return to school with here classmates. She remained on oxygen, but continued to recover. Eight months after being sent home she had a lung biopsy to confirm that there was no other active disease process. Her first pulmonary function test showed 30% of normal lung function. Her baseline has increase to 50-60% lung function.

Jessica is now 12 years old. She most likely will always require this suplemental oxygen at night, but does not need any during the day. She has been cleared for any activity she wants to do. Since her recovery she has cheered, been on the swim team, played volleyball and is thinking about playing basketball, too.

A highlight from 2005 was that Jessica had the opportunity to participate in the “March for Miracles” in Chicago in support of ARDS research & the ARDS Foundation. She is still hoping to find other children who have survived ARDS and is in need of someone to understand what they have been through.

Julie and Brad know how lucky they are to have her. “She was so close to never coming home with us again.”
The prayers and support from family, friends, co-workers, and communities was incredible Julie and Brad looked around at parents in the PICU and knew how lucky they were, both able to be at Jessica’s beside. They cherish the small community in which they live…because of the people.