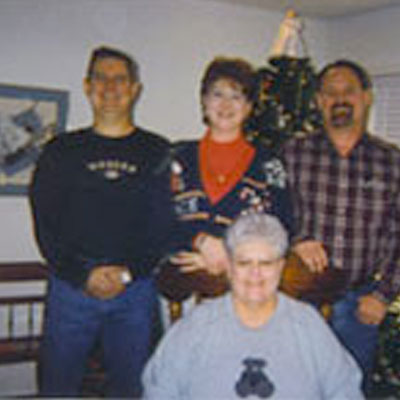 On March 14th, 2004, Ilene Pinkerton was on Spring Break from her position at Howard Payne University Library, in Brownwood, Texas. She had stopped by her daughter Karla’s house located in Abilene, Texas, on her way to spend the week with her mother. She had been to the doctor on March 13th, and was diagnosed with bronchitis, possibly brought on by acid reflux.

When she arrived at Karla’s home, she was not feeling well, though she had been taking the medication the doctor had prescribed. She started a two hour trip, but before she even got out of town, she decided she was not well enough to travel. Ilene was having the usual symptoms of bronchitis, but nothing out of the ordinary. She returned to Karla’s house to rest.

That evening, Ilene began to cough and had a little trouble breathing, but, nothing out of the ordinary with an upper respiratory illness.

By March 15th, Ilene was not feeling any better. Although she had an appointment to see the doctor the following day, by that evening, it was obvious that she was too ill to wait. Karla and her daughter took Ilene to the emergency room. Ilene’s breathing had become very labored, and her oxygen level was 78. The doctor on call ordered an x-ray and blood work along with an ABG. The doctor said that Ilene might have viral pneumonia and she was admitted to the hospital. This first night was pretty uneventful, oxygen levels stayed in the 80’s.

On Tuesday, Ilene’s doctor began to question the diagnoses given in the E.R. In the early afternoon, with Ilene still on oxygen, she was taken for an echocardiogram, suspicious she might have congestive heart failure, though she never had heart problems before. When Ilene returned from her test, her oxygen levels began dropping dramatically, and her breathing was getting faster. The nurse instructed her to take slow, deep breaths. Ilene would try her best to comply but after a couple of breaths, she would begin breathing fast again.

The nurse and Karla took turns helping Ilene to try to breathe with slow, deep breaths. After about 2 hours with the oxygen levels declining from the 70’s to 60’s and eventually dropping to the 40’s, the nurse contacted the doctor. He came in and said that Ilene would be transferred to ICU.

Still unaware of what might be wrong, the wonderful nurse who had stayed with Ilene first mentioned that she ARDS. This was the first time Karla had ever heard this term. Ilene’s doctor and the pulmonologist that had been called in were not ready to diagnose ARDS, but the pulmonologist did say he felt Ilene must go on a ventilator. Ilene had already made a decision in the past that she did not want to be kept alive by a machine, but not knowing what we were facing, Karla asked her Mom, and Ilene said, “ I think we better.” Unknown to Karla at the time, they were the last words Ilene would ever speak.

Karla left the room while the procedure was performed. When she returned, this beautiful, strong, courageous woman who had raised 3 children after the death of her husband, lay lifeless in a drug induced coma. Ilene’s oxygen levels increased slowly and eventually reached the 90’s. The ventilator was set at 100%. After notifying Karla’s two older brothers, and Ilene’s Mother, brother and sister, the family began their ARDS story.

On Wednesday the 17th, after tests, the doctors began to suspect that Ilene had ARDS. Before leaving the hospital that night, Karla’s daughter began searching to learn about ARDS on the web; they were shocked with the mortality mortality rate, but held out hope for Ilene. That day, the vent was reduced to 60% and the following day, the vent was reduced to 40% for most of the day. Blood cultures that had been taken earlier came back negative, x-rays seemed to show some clearing in the lungs. In the evening vent settings were increased to 60%.

By Friday, March 19, the vent had been increased to 80%. The PEEP was also set pretty high. Ilene showed no signs of fever and things began to look better. Saturday started out good, but by 3:00 p.m. they had increased the vent to 100%. Around 5:00 p.m. Ilene’s oxygen levels began dropping. They continued to drop even with adjustments and the addition of paralytics and morphine. Her x-rays looked bad. However, she began to stabilize. Oxygen levels were back in the 90’s on 100% vent, and PEEP was at 14.

On Sunday, Ilene began running a fever. Blood cultures were taken and eventually came back positive. She was started on antibiotics for MRSA and on steroids to help heal the lungs. Ilene was becoming very puffy so a diuretic was added. On the 30th, doctors said Ilene had pneumo-median stinem, which is air between the lungs. This was a complication caused by the vent being at such high pressures for such a long period of time. A tracheotomy was also performed. Because enough air was allowed to escape they did not feel a need to insert chest tubes.

In the days that followed, vent pressures were eventually reduced to 60%. Antibiotics and steroids were stopped. On April 7th, Ilene’s heart rate was running high for which she received medication. Vent settings were lowered to 55%. She also developed bedsores and was being treated with special bandages. On April 9th, the family was informed that the MRSA had become active again.

A bronchioscope was performed on April 12th, but it did not show any new or untreated infection. Ilene’s family also discussed with the doctor their concerns that she would not recover, and if she did, what the quality of her life would be. The doctor stated he did not know if Mom would ever be able to get off the ventilator. In the past several days, Ilene seemed uncomfortable, she had a grimace on her face at times and would turn her head back and forth. At times her eyes were open but glazed over, as if she was not seeing anything. Ilene’s condition did not seem to be improving.

Karla and her brothers met with Ilene’s doctors on Friday, April 16th, Both doctors agreed that Ilene’s body had “missed its opportunity to heal.” The doctors stated that if Ilene was to have any quality of life she would have to be put through (in the doctor’s terms) “Hell.” Ilene’s doctors agreed to do whatever we decided, they did not try to sway us. Karla’s brothers and I talked and prayed about it and made the decision to take Ilene off of all life support and give “comfort care,” which included Morphine, sedation medications and oxygen.

Saturday, April 17th, 5 weeks after our ARDS story began, at 11:45 a.m., sixty-five year old Ilene’s ventilator was removed and replaced with a T-Bar for oxygen. Ilene’s levels began dropping immediately, as soon as her oxygen reached 0, her heart rate began dropping rapidly. It took less than 5 minutes for Ilene to go. Karla and her brothers I talked to her until the very end. They expressed how much they loved her, “what a special Mom she was, and we assured her we would be okay, and that it was okay for her to go.”

Karla said, ” This was the hardest thing any of us had ever had to do. But we come from a strong Christian background and are all at peace with the decision we made. This is what Mom would have wanted. We don’t always understand why God allows things to happen the way he does but we must continue to trust and have faith in him. He always knows what is best. I know my Mom’s ARDS story may not have a happy ending, but we know that our Mom, Grammy, Sister, Daughter, Aunt and Friend continued to teach us to have faith and trust in God in her death as she did in life. And we know we will see her again someday.”