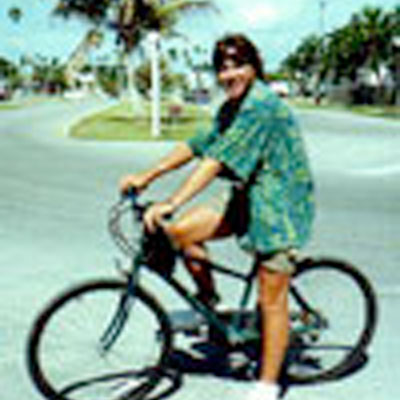 In June, 2000, thirty-five year old Jack, went into respiratory arrest and was diagnosed with ARDS. Jack had a drug problem for many, many years and overdosed on heroin. His lungs had become so hardened and congested. The wonderful staff at University of Michigan saved him after nearly one month in ICU.

Jack came home from the hospital to his family’s house to recuperate. He weaned himself from the oxygen after about 2 months at home. He was doing very well and was off of drugs. In January, he moved to a small condo near his family. In March, Jack joined his parents in Florida where they spend the winter. He stayed for 2 months and looked better than he had for years, tan and healthy. He fished and rode his bike everyday, gaining back his strength. He returned to Michigan the end of April.

Two weeks after that, Jack was on his way to his cousin’s college graduation party, but he never made it there. It was May 13th. He was found in the car slumped over the wheel, parked in a fast food restaurant in the inner city of Detroit. He died of a heroin overdose. His lungs just could not take anymore drugs. Jack’s doctors had warned him of the risks, but Jack always thought he was invincible, he always said he could bounce back. This time he did not and Jack’s parent’s hearts are forever broken.

They are telling Jack’s story because they want anyone who thinks that they are invincible, that they can outsmart the drugs, the addiction, to realize, to really know, the terrible sadness that drugs bring to all involved, not just to the user, but to his or her family and friends. When he died, Jack was probably very hopeful about his life.

He had many dreams and aspirations that were never realized. He probably thought to himself that one more time using heroin would be okay; after all, he had survived ARDS. Jack’s parents stand here, ready to say that one more time was one time too many. And now, they only hope that Jack’s story might touch someone and have meaning for someone with similar problems.

Some might say that Jack was saved in vain last June 2000, but God and the doctors gave them one of the best years that they have ever had with Jack and those last 2 months in Florida hold the most wonderful memories for them. Jack had a most loving heart and a great sense of humor. He just took the wrong path and even thought he fought the addiction, it finally won.