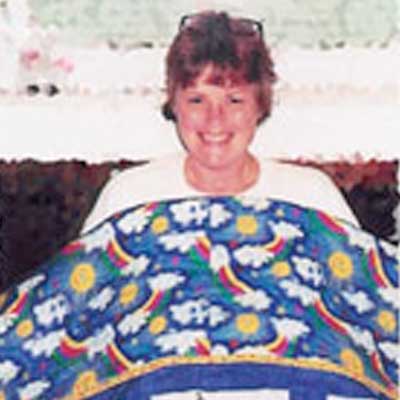 Dee’s ARDS experience began on April 14, 2000, with an emergency call to 911. Until this time, Dee had been in good health, working as a professor of teacher education at Saginaw Valley State University, Saginaw, Michigan, for fourteen years. By Sunday, April 16, Dee was a critical care patient struggling to stay alive. Twenty-nine days later, Dee was released from the hospital, dependant on medical care at the age of 49.

Dee’s introduction to the world of Acute Respiratory Distress Syndrome (ARDS) began in March 2000 when she had tubes surgically inserted into her ears to correct hearing problems. As she came out of the anesthesia, she suffered a massive asthma attack, the first one she have ever had. From this point on, she developed asthma, headache, flu-like symptoms and hallucinations.

She spent 29 days in the hospital supported by a ventilator and having tubes inserted down her throat. As Dee puts it, I was dying. The entire experience was surrealistic.

After Dee’s symptoms somewhat subsided, she came home dependent upon 3 liters per minute of supplemental oxygen, 24 hours a day, 7 days a week. Her vocal cords had been injured during the intubation. Dee was also suffering from breathing, mobility, emotional, and cognitive problems, and was terrorized by hallucinations, flash backs, and nightmares. I was so scared, said Dee.

Through rehabilitation, Dee relearned how to walk, read, write a check, cook, develop a sense of humor, and drive a car. A student teacher specializing in Special Education lived with her the first six weeks. Then the Visiting Nurse Association sent physical, occupational, and speech therapists into her home. She wore a Lifeline button suspended on a black cord and checked in twice a day so that someone always knew if she was alive.

Dee entered a Pulmonary Rehabilitation program in January 2001 and graduated in March. She was completely weaned from supplemental oxygen in April, almost one year from the day she went into the hospital. In that year, she went from a relatively normal life to a life filled with rehab sessions, Better Breathers support sessions, and quilting classes.

I wanted to learn about ARDS and to understand it. About six weeks after getting out of the hospital, I relearned how to use my computer, my e-mail, and then I discovered the ARDS community. I met many wonderful and supportive people post ARDS.