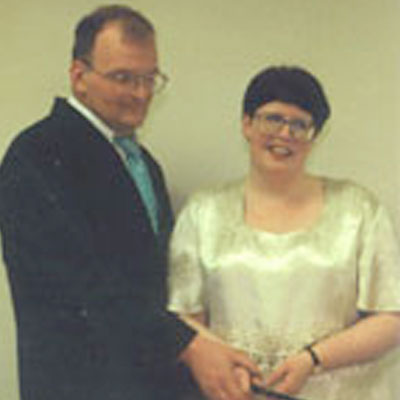 On April 5, 2002, Cynthia went to the ER after suffering severe abdominal pain for about 5 hours. She was diagnosed with kidney stones and a system-wide infection, which eventually turned into sepsis, a toxic condition resulting from the spread of bacteria from an infected site resulting from a blockage caused by one of the stones. Cynthia was put on massive doses of antibiotics and scheduled for minor surgery to bypass the blockage.That day, Cynthia was sent home but the following day, she was told that the infection had become much more severe than originally thought.

Cynthia was told to go to the hospital every twelve hours to receive antibiotics by IV. That evening, Cynthia went in for the first dosage and was scheduled to go back the next morning. But when she awoke, her fever had spiked to 104 degrees and she was having difficulty breathing. Cynthia’s husband, Bryan, took her to the emergency room where they were amazed that she walked in herself, due to extremely low oxygen levels. Once they got her fever under control, her breathing returned to normal, but Cynthia was admitted to the hospital to await her surgery, which was scheduled in two days.

Cynthia has another episode of breathing difficulty the next evening. But what really bothered her was that during both of these episodes, nobody seemed to believe that there was truly anything wrong with her lungs. They all kept urging her to breathe deeply, and she felt that everyone thought she was having some kind of anxiety attack. Cynthia knew both yoga and tai-chi, and had successfully used deep-breathing techniques for years, so she would have slowed her breathing if she could.

The day of Cynthia’s surgery, apparently everything went well until she was in recovery. At that time, she went into full-blown respiratory failure, and was quickly diagnosed with ARDS. Cynthia was sedated and put on life support; that evening, she was flown by Medivac to Harborview Medical Center in Seattle. She was kept in a drug-induced coma for two weeks, and while she has random memories of being awakened on occasion and of dreams she had while in the coma, her first true, wide-awake memories are from the day they woke her up completely… April 24, 2002: Cynthia’s 47th birthday. What a fantastic birthday gift!

Of course, at first, Cynthia was extremely weak and absolutely dependent on somebody to do everything, from feeding to using a bedpan. She recalls setting goals for herself… first, to drink thin liquids again, since she choked easily after two weeks on the ventilator; then, to sitting up, to standing up, to walking to the bathroom. Cynthia achieved her goals fairly quickly; the medical staff told her what a quick recovery she was making.

But all Cynthia could think was, “What do you mean, quick recovery? I can’t even use the bathroom by myself!” But then, at that time, Cynthia only had a very vague idea of what ARDS was and how deadly it could be.

Cynthia did not know that while in the ICU, her family was told to be prepared for the worst on several occasions. But on her eighth day in a regular hospital room, they told Cynthia that there was no longer a medical reason to keep her in the hospital, and she was discharged. Cynthia and her husband stayed in Seattle for six more days so that Cynthia would undergo some outpatient physician therapy before flying back home in Ketchikan, Alaska, on May 8, 2002.

Cynthia feels very fortunate to say that she has few lingering effects from ARDS. She has had some wheezing and occasional shortness of breath, for which she carries an inhaler that is rarely used. In every other way, Cynthia is physically back to normal, which she took for granted until she began to read other people’s ARDS stories and realized how so many never return completely to their former physical condition.

Cynthia has often commented that she must have had a very “mild” case of ARDS, but when she discusses with her husband and son what went on while she was in the coma and when she reads stories of others who were not on life support for as long as she was but who have many more devastating effects to their health, she has to admit that it sounds like her recovery has been nothing short of remarkable.

Cynthia feels she is a very strong person emotionally, and very determined, and she likes to think that had something to do with her quick recovery. That, and of course, the prayers and thoughts of many friends, family members, coworkers, and even people who didn’t know her but knew that Cynthia was in a fight for her life!

After reading all the stores, she realizes that every case of ARDS is critical and life threatening, and often it is not the length of time that one might spend on the vent or in the hospital that will determine what sort of post-ARDS effects one might have, but she is grateful that she has come through this syndrome relatively healthy.