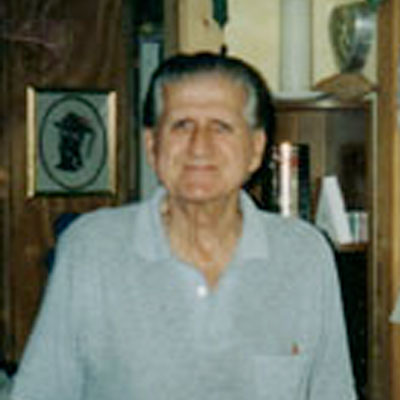 Dorothy Stuff, Constantine P. Peterson’s daughter will tell you that her father had never been sick; he always was strong and hardworking. As a cabinet maker and carpenter by trade, he was seventy-six, still active and working like a young man. On March 1, 2003, he began to feel ill but did not mention this to anyone until that evening when he said that he needed to go to the doctor the following day.

The next day Constantine went to the emergency room.

He learned that he had apparently had a heart attack that began the day before. He was taken to West Florida Hospital in Pensacola, FL and on March 4, they performed triple bypass surgery on him. Dorothy called the hospital every day to check in on her father, and spoke to him for a minute, she told her father that she loved him and he said to her that he loved her. Those were their last words. For on March 4th, ARDS hit, and Constantine was forced back on a ventilator.

Constantine fought his wife, Dorothy’s mother, and also the doctors because he did not want to be on the vent. Dorothy felt that he somehow knew that he was dying. When she called on Friday to check to see how he was doing, she was not able to find him. She kept pressing until she learned that her father was in ICU and in critical condition. She left a message for her mom, they made contact and soon, Dorothy was in Pensacola.

Constantine seemed to be holding his own but something told Dorothy that he was not going to beat this syndrome. She held his hand, told him that she loved him and prayed very, very hard. Suddenly Constantine took a turn for the better and Dorothy returned home. But two days later, her mother called and said that they needed to return as her father’s condition had worsened. Dorothy called the hospital, and spoke to his physicians, who confirmed what Dorothy’s mom had said about her father’s condition.

Besides Dorothy, many members of Constantine’s family arrived. And as the days would pass, Constantine would get a little better one day, and then, on another day, decline. Finally, on the evening of the March 27th after many days of watching her father’s health rise and fall, Dorothy said a prayer that she says still haunts her today: “I prayed that God would either turn him all the way around and give him back to us or take him home and let the suffering stop.”

At 6:30 am, March 28, 2003, Constantine P. Peterson died. The battle was over, his suffering was over, and he lost the battle with ARDS. Dorothy’s biggest regret is that the hospital, as wonderful and caring as they were, were not as educated about ARDS as they could have been. Dorothy does not know that it would have made any difference, but maybe it would have.

It is especially for this reason why Dorothy wants everyone to know about ARDS and to help educate the not only the medical community, but the general public as well. Dorothy’s father was special to his family and all those that knew him and everyone will all miss him terribly, but Dorothy feel that if somehow she can help educate people about ARDS, perhaps maybe in time, they will not loose a loved one as Dorothy and her family did.