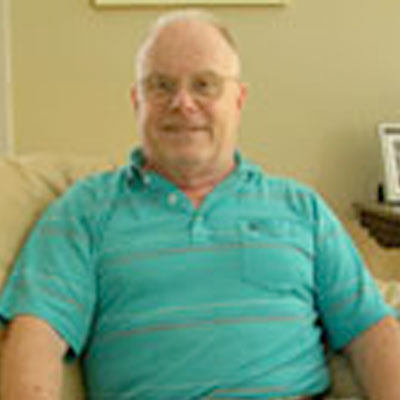 Chuck’s ARDS story began when his wife called 911 on August 18, 2005, after she found him with 105 degree fever and incoherent.

Chuck had just retired from the University of Virginia several months before. He was 69 years old at the time. Immediately, Chuck was diagnosed with ARDS, septic shock and a fungus infection in about 60% of his lungs.

Chuck spent 14 days in the ICU, 10 of which was in a drug induced coma. He was on a ventilator the entire time he was in the coma and on oxygen the entire time in ICU. During that time, Chuck’s lung collapsed during a procedure and a chest tube was inserted. He required seven blood transfusions.

When Chuck awoke, he first saw his daughter and her two young girls looking at him; what a wonderful wake to awaken.
Though his doctors did not expect Chuck to survive those first days, he fooled them all.

During his hospitalization, Chuck was on some medications that might cause permanent damage to possibly his heart, kidneys or liver but luckily, Chucked suffered no damage. He recalls getting depressed when he learned that he could not leave the hospital but with the support of his wife, family and clergy, he persevered.

Chuck was completely deconditioned after his hospitalization and he spent the next two months at the University of Virginia Hospital recovering and relearning to use his limbs again. Chuck recalls the first time he tried to eat by himself and he could not even hold the spoon.

After two months in the hospital, Chuck was sent to a nursing home for additional physical therapy to receive medication that would have otherwise cost $1,000 a day. After seventeen days, Chuck finally went home.

Chuck lost 40 pounds while hospitalized but has been able to put most of the weight back on. He participated in the ARDS study at the University of Pittsburgh. Once home, he continued his physical therapy at a local health club. They helped to get Chuck walking and helped with his balance issues.

At his last check up, Chuck’s lungs were almost clear, but he still gets tired easily. Chuck suffers from a form of leukemia, CLL.

Today, Chuck suffers from pain in his heals when standing for more than a few minutes. His sleep is erratic, waking after a few hours and having trouble falling back to sleep.

Chuck’s thoughts: “After reading all the accounts of other people, I consider myself very, very lucky man. I thank God every day for saving me and for those who prayed and stayed with me the entire time. Good luck to all of you who have gone through this terrible ordeal.”