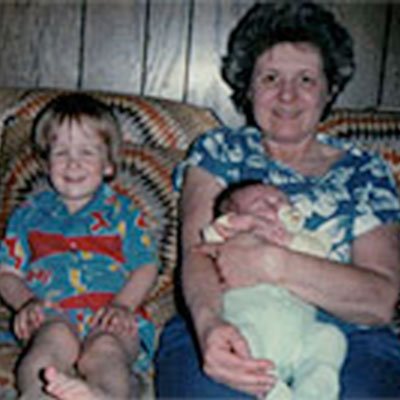 The McFarland’s ARDS story really begins in November, 2000, when Brent received a call from his father; he was told that something was wrong with his mother, Carolyn. She had a pituitary tumor wrapped around her optical nerve causing her to lose her eyesight.

After the three-hour surgery, twenty percent of the tumor was removed and Brent’s mother could see again. Her physician told Carolyn that she needed radiation to shrink the tumor. She was advised there was a one percent chance of blindness.

Brent’s mother had the radiation but was given such an excessive amount, that she was unable to have anymore. Carolyn was forced to retire from her position as a cashier after twenty years, but worse, Brent’s father called to say that she was acting very confused. When Brent checked on her, his mother could not see. Brent took his mother to the hospital, tests were done and the outcome was that radiation burned the optic nerve and Carolyn was 100% blind for the rest of her life. At only sixty-three years old, she would never see her 5 grandchildren and 3 step-grandchildren grow up. Worse, yet, within the next three years, she would develop osteoporosis, diabetes, short-term memory loss, and numerous mini strokes.

However, Brent will never forget that call on April 30, 2003, when his father told him his Mom’s breathing was not right and that she would not respond to him. Brent drove to their house and saw Carolyn hyperventilating and was non-responsive. An ambulance took Carolyn to the hospital and she was admitted into the ICU unit.

Carolyn was put on a ventilator and the family was advised that she had a stroke on her spinal column, which affected her breathing, and only time would tell. Three weeks later, when they tried to take her off the vent, she would not stop coughing so they put her back on the vent. They did a tracheotomy and they transferred her to a specialty hospital where they could try to wean her off the vent. She would not respond to any one while she was there.

Insurance decided to have her transferred her to a nursing home, and about three weeks later, Carolyn pulled her trach tube out. Brent’s mother was taken to the emergency room and the doctors decided to take the trach out. Carolyn was beginning to come around. But about three months later, the family received a phone call, at around 8pm, from the nursing home. They were told that their mother was not doing too well.

When Brent got to the nursing home and saw she was breathing heavy as she was on the 30th of April, Brent had the nursing home call 911; when she arrived at the hospital, she had many tests. The emergency room doctor told the family that Carolyn, who was only sixty-six years old, had less then a fifty percent chance of survival. The pulmonologist reviewed her tests and diagnosed her with acute respiratory distress syndrome.

Brent was the first to arrive. When he entered the room, Carolyn breathing was labored. The family was at her bedside holding her hand when Brent gave her a kiss and said, “I love you, Mom.” Brent’s mother took one more breath and then, no more. That was November 21, 2003. At 11:00 pm, Brent knew that for his mother, there was no more pain. Brent’s family laid her to rest on November 24, 2003. Carolyn is survived by her husband, two sons and eight grandchildren. Brent resides in Indiana.

Brent McFarland
“I love you, Mom.”