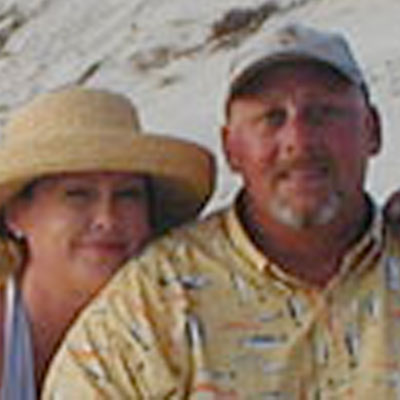 Bryan was undergoing cancer surgery on July 1, 2003 at Vanderbilt University Hospital in Nashville, TN. He was forty years old. The surgeon had gone over all the risks involved with major surgery and Leisa and Bryan were confident that Bryan would breeze through it as usual. This was a recurrence of colon cancer that he had been originally diagnosed with in 1999. At the time, it was found in stage three, and Bryan had a colon resection, followed up with six months of chemotherapy.

Bryan’s lab work (CEA tumor marker) had been slightly elevated for the last two years, but had showed a steady increase starting in November of last year. The cancer was back, but the scans were not picking it up. When it finally did show up on a CT scan in May, it was not very large, and only one tumor in one small area around the ureter under the right kidney. The surgeon hoped this would be the only area they would find the cancer; however, he prepared Bryan and Leisa for the “worst case scenario” and said it was possible it could be elsewhere, that they would not know the surgery.

However, four days before surgery Bryan began to complain about an “excruciating” pain in his right hip and abdomen. As Bryan has a high tolerance to pain, this was unusual; the ibuprofen did nothing to relieve the pain at all.

On the morning of surgery, in the pre-op area, Bryan and Leisa told the doctor of the pain, but the doctor did not respond. When they called Bryan’s family to the conference room to meet with the surgeon after three long hours of waiting, as soon as the elevator door opened and Leisa’s eyes met the surgeon’s eyes, she knew the news was not good.
The surgeon said that it was the “worst case scenario.” They had to close Bryan because the cancer had spread so extensively, and they removed nothing. The doctor said that he was concerned that the cancer had spread when they had mentioned the pain to him earlier. He said it was “tumor pain.” Bryan and Leisa were terribly upset.

That night in the room, as Bryan slept, Leisa had been praying for a divine miracle and asked God to heal him. Leisa said that God gave me such a perfect peace as she sat there in silence. It had been a horrific day, the worst day of my life, and yet, God gave her peace.

The next day went well considering Bryan had to absorb the enormity of the events of the previous day. Bryan sat in a chair, walked with very little assistance, as he was determined to home in four days as his doctor had promised. Typical Bryan, strong and determined. However, Bryan did require oxygen, and begun needing “more oxygen than normal” during surgery, though the doctors said they were not sure why and did not too concerned about.

That evening, Bryan’s condition changed dramatically. After receiving a breathing treatment around 8pm, Bryan became short of breath. Leisa alerted the nurse, but then she began having difficulty breathing. Leisa speculated at first that perhaps it was because a hospital janitor was polishing the floor with a buffer just outside the room putting something noxious into the air. The janitor left, Bryan received another breathing treatment, and Leisa received Albuteral. Leisa felt relief very quickly, but Bryan continued to get worse.

As his difficulty breathing continued, Bryan ended up in ICU and on a ventilator a few hours later. Leisa had never seen anyone on life support before. Her knees almost buckled the first time she saw him. The family acknowledged feeling this way as well.

Bryan was diagnosed with ARDS and they put him on paralyzing drugs a couple of days later. His complications included: fevers, low blood pressure and his heart stopped a couple of times. Leisa could not believe her husband was in critical condition. She read scripture out loud to him, held hands, and prayed over him.

On July 9th his lungs collapsed. The doctors were doing everything and yet, nothing was helping. They thought it would be best to call the family to the hospital in case of his death. Leisa stayed in the chapel; she could not bear to look at Bryan at that point. She said: “He looked dead. My heart was broken, but I kept pleading with God not to take him.

The doctors came to the chapel to sit with me at times. I told each one of them that I didn’t believe that God was going to allow Bryan to die and that I had to believe that Bryan would get well and walk out of the hospital. I told them I believed that Bryan was going to be healed.” Leisa thought that there were moments that she could hear those words coming out of her mouth and wondered, “I must be crazy!”

But then that night, Bryan became stable! One of the critical care doctors said it was “divine intervention.” The entire ICU staff was amazed, and other doctors and nurses have called him a “miracle.”

Everyone continued to pray over Bryan, speak to him, and encourage his recovery. Bryan was in the ICU for 29 days and was released from the hospital after six weeks. He spent another 10 days in rehab and still goes to outpatient rehab a couple of times a week at this time. Bryan and Leisa are trying to get to know each other again. Bryan does not feel like himself post ARDS and has all the typical complications from ARDS.

Bryan and Leisa, who currently reside in Knoxville, Tennessee, have one adult child, Jon, who is twenty. In mid September, 2003, Bryan began chemotherapy. The lab work which was done the week before they started chemo revealed that his CEA level had dropped to a 17, down from the 39.5 the last time it was checked on April 29th. Another “miracle” by which the medical staff is stumped and amazed. They can offer no medical explanation as to why a tumor marker lever would decrease with no cancer treatment.

Bryan currently has had no tumor pain. Their lives are beginning to become more structured and Bryan is looking forward to the days when he can feel more energy, strength, and just more good than not. Leisa says that she is in constant awe of God’s blessings in my life.

On March 22, 2004, Bryan Clemons found himself back in the hospital in ICU. At first, they were not sure what was wrong with Bryan but by April 5, they had confirmed that Bryan was diagnosed with ARDS. Though Leisa and the entire family was devastated that they would again have to face this diagnosis and the ARDS roller coaster, they were ready. Bryan was a fighter, he had beaten cancer, and he had beaten ARDS once before.

On Easter Sunday, it seemed Bryan would not survive, and a few days later, he was still declining, but then on April 20, 2004, Bryan began to show some slight improvement giving Leisa and the family hope.

Still, sadly, on April 25, 2004, at 5:30 AM Bryan Clemons passed away. Bryan is survived by his wife Leisa, whom he met at the age of seventeen and was married to for 22 years, as well as his son, Jon, family and friends, all of whom will miss him dearly.