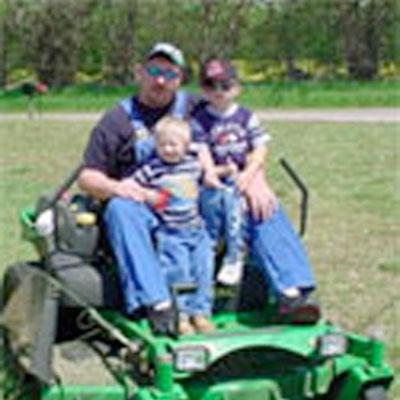 Brad’s ARDS experience began when he was thirty-one years old, in December 2004. Before that time, he had never really been sick but was not feeling well for about a week. Brad was coughing and having a tough time catching his breath..

Finally, his wife, Wendy, convinced him to go to the doctor who told him that he had bronchitis. On December 9, Brad’s doctor gave him a shot and sent him home with an inhaler.

On December 13, Brad felt worse. Still, he went to church that morning and that afternoon, to work. However, only a little over an hour after arriving at work, Brad called Wendy and said, “I can’t breathe. I am going to the hospital.”
Wendy and their children met Brad at the hospital. Brad was in Intermediate Care at Good Samaritan Hospital in Vincennes , Indiana , doing okay but on oxygen. The next few days, Brad’s oxygen was at 100% and he was uncomfortable. The doctors said that he had pneumonia in one lung.

On December 15, 2004, Wendy called Brad at the hospital repeatedly but could not reach Brad. Finally, a nurse called and said that he had been moved to their Critical Care Unit. .

Wendy did not understand what was happening. When she arrived and saw Brad, he was so helpless and frightened. The doctors discussed putting him on the ventilator.

For three days there was no response from Brad. His doctor told him that after three days, he would get better. During that time, his kidneys were beginning to shut down and things looked bleak. But suddenly, after three days, Brad awoke. And he wanted to get off the ventilator. But it was not that simple. Brad was not ready.

But after being on the ventilator for seven days, he was taken off the vent, on December 22, 2004, and moved into another room. On Christmas Eve, the doctor came in Brad’s room and found him dressed! He was determined to be home with his family on Christmas.

However, Brad’s recovery took much longer. He still needed to learn to walk and has been unable to return to work. The heat and the cold really trouble him. He remained on steroids for over a year, post ARDS, and now has Diabetes.

It wasn’t until later that Brad and Wendy learned what happened to Brad but eventually they learned that he had aspirated into his lungs causing a massive infection before he was diagnosed with ARDS.

Brad has since had surgery to correct this problem and his lungs are continuing to heal.
Wendy and Brad, who live in Lawrenceville , Illinois , know how precious life is, after loosing one of their four children. They are so thankful for each and every day that they share together as a family..