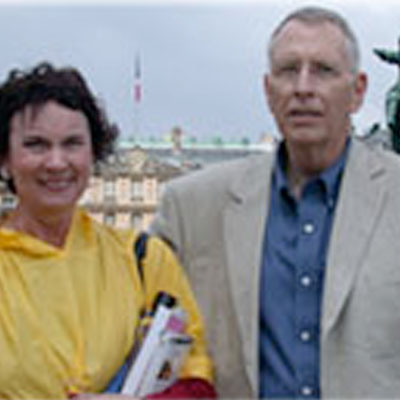 It all started for Bob Jayroe on May 25 in Palo Alto, CA with a sore throat when he was working with Lockheed Martin on a NASA/JAXA funded solar telescope project. Bob waited to get home and see if it would get worse or go away. Since it did not go away, Bob went to his doctor and was treated me with a general antibiotic for a sinus infection. Soon they learned Bob had strep, so he switched antibiotics. Then Bob developed a yeast infection in my throat, which also had to be treated.

Bob did not get any better; his blood pressure skyrocketed and he had Mary Ann take him to the emergency room. The next morning, Bob’s doctor agreed to see him. Bob said that for the first time in his life, he was afraid, that he felt like he was dying.

Bob was admitted to the hospital. His sodium level was out of whack; he was on the verge of having a seizure. Bob’s doctor called in several specialists.

After several days, they confessed hat they had no idea what Bob had; all they could do was treat the symptoms. After 8 days in the hospital, Bob was told that he had a variant of Guillon Barre, which caused double vision and some loss of control of his tongue.

Bob was released from the hospital on June 25 and allowed to go on his planned family vacation. Bob, his wife Mary Ann, and their son and daughter in law left for Paris on July 9. They took the Eurostar train from Paris to London on Saturday, July 17. They planned to return to the US on July 27.

On Monday morning, July 19 Bob woke up at 6:00 am, and could not breathe. He called his son, Rob, and was gasping for breath. Rob immediately alerted the front desk to call the paramedics, and then raced to Bob’s room. The paramedics arrived and while there, Bob’s breath returned. They thought that Bob was just having an anxiety attack. Later that day, when Bob was napping, he was awakened unable to breathe again.

Mary Ann had the front desk call a doctor; the doctor called an ambulance after his exam. Bob remembers stepping in the back of the ambulance; that was the last thing he remembered for the next five and a half weeks. He was admitted to the ICU in Guy’s and St. Thomas’ Hospital that day.

Bob spent the next eight weeks in the ICU. Though not told what his precipitating cause was, Bob eventually was told that he had Acute Respiratory Distress Syndrome (ARDS). He was also told he nearly died several times. Bob was put in a drug-induced coma; still, he would fight the ventilator.

After being on the ventilator for several weeks, Bob developed ventilator pneumonia (VAP); later, Bob got a staff infection. Bob also recalls vivid dreams. He lost twenty-six pounds, all his muscle tone, and had to relearn to walk and swallow.

In September, Bob was released from St. Thomas’ via Iceland, New Foundland, and Toronto directly to Huntsville Hospital. The flight took twelve hours. After one week in Huntsville, Bob spent two and a half weeks in rehab and was released to his home on October 6. Bob finished outpatient PT at the end of November, but continues to work out on his own.

Now Bob is driving, walking, and working forty hours a week. Bob says that ARDS is the most discomforting illness he has ever experienced. Initially, Bob woke up every half hour or so, due to his dry mouth. Everything tastes funny. Bob’s combined shortness of breath and muscle weakness makes everything difficult.

But Bob looks at the positives; he is a little stronger every day and his breathing has progressed. Several people at work comment that he is beginning to look like the Bob they remembered me.

On Christmas, his daughter and son-in-law gave Bob a special gift; it was a scrapbook, inscribed on the cover with the Grateful Dead phrase, “What a long strange trip it has been.” On the inside were two inches of emails from London to America and back during Bob’s two-month stay in the ICU at St. Thomas’ Hospital. When Bob started reading the scrapbook, he could not put it down. It was an incredibly moving tribute.