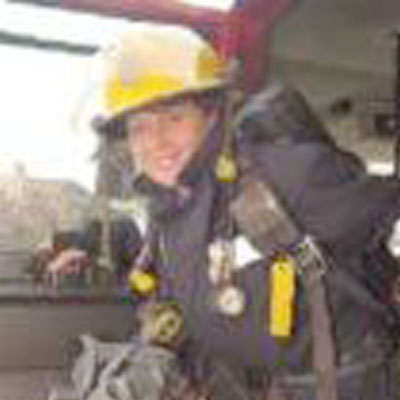 Amanda’s story began in a rather unusual way. She had worked for five years in Ohio, in emergency services and loved her job, rotating between the engine as a firefighter and the ambulance as a paramedic.

It was May, 2005, when twenty-four year old Amanda was given a well deserved two week vacation; she started off that morning heading from the station immediately after getting off work despite the fact that she was feeling quite tired and run down. Amanda assumed it was just from 24 hours of stress and only 4 hours of sleep. The trip started uneventfully visiting friends, until Amanda stopped in a small town in Tennessee. Amanda decided to stop for a sandwich when she felt a sudden, sharp pain in her chest. It was persistent and would not go away, but she still thought it was nothing.

Amanda got a coke and sandwich hoping that would help and then got back into her car when the pain became so severe, she had to pull to the side of the road. Amanda tried to dial her friend but her cell phone would not connect. Luckily, a police car noticed her emergency flashers, stopped to see if Amanda needed help and called for EMS.

Though it seemed like forever before the EMS crews arrived, it was only minutes. Amanda was an experienced paramedic, but did not know what was happening, and it was frightening. Amanda asked what was happening, but was told nothing. She was rushed to the closest hospital, a tiny community hospital.

At the ER, Amanda was greeted by several doctors, nurses, and techs. Everything was going so fast, but she could not comprehend why. Suddenly, the whole picture became more clear. Amanda’s heart was in a condition known as SVT or supraventricular tachycardia, meaning that her heart was just beating out of control at almost 200 beats a minute. She had a 103 degree fever and there was signs of pneumonia on the x-ray.

Amanda was started on antibiotics and admitted. Things began to look better in about two days, when suddenly her temperature spiked to 105 degrees, she started to have seizures, felt she could not breathe and that her heart was racing again.

Another chest x-ray revealed near white out. Amanda drifted between consciousness and was fighting for every breath. Her heart rate hit 220, and a call to the cardiologist revealed a scary prospect. He told the doctor Amanda was in bad shape. Soon, a helicopter was called and Amanda was flown to Vanderbilt University Medical Center.

Amanda was admitted into the ICU and packed in ice in an attempt to reduce her body temperature. She was intubated and placed under heavy sedation. Shortly thereafter, Amanda was diagnosed with sepsis and ARDS.

For nearly a month, Amanda struggled to live fighting both the sepsis and the ARDS. She remained on a ventilator paralyzed and sedated in an attempt to give her body time to heal. Gradually Amanda began to improve, the sedation was lightened, and she began to become aware of what was going on.

Amanda had difficulty in understanding how she could get so ill so quickly, especially when she had passed the department’s physical less than a month before. Eventually, she learned the ARDS was triggered by the sepsis which probably occurred due to a urinary tract infection.

The doctor told Amanda that they were determined not to give up on her, no matter how difficult. Amanda learned that she had multiple blood transfusions, many antibiotics, many seizures, and how terrible her prognosis had been.
Amanda had never thought that she would die. She did not know much about ARDS and did not realize that about 50% of those diagnosed with ARDS die. The doctors told her that her recovery would be lengthy and they were not sure she would be able to return her career which she loved.

Amanda was very deconditioned when she began rehabilitation. Eventually, she got enough strength to return home, and with the encouragement of friends and my former coworkers, she improved. Still, Amanda was determined.

In June, 2006, Amanda returned to her position as a paramedic. She will be assigned to engine duty in the beginning of 2007. Amanda has been fully cleared medically and just waiting for her new assignment.

After this experience, Amanda said, “I learned to cherish every day as you never know when it will be your last. I went from being the caregiver to the one cared for in a fight for my life in a matter of days. Research needs to go into this condition as it can be so deadly, and is more common than people realize. Even being in healthcare, I knew very little about the condition. I got a crash course education. I am just blessed and thank God every day that I made it. I was given a second chance, and for that I’ll forever be grateful.”