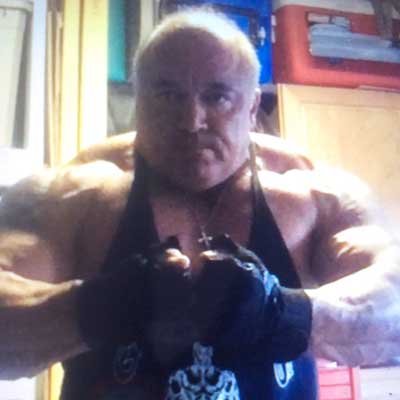 My story begins late December after Christmas with my family in Colorado. I had flown back to California, my state of residence for the past 10 years. I was back on the truck driving long-haul as this had been my job for the past two years. I took pride in taking care of my health, with a good diet and commitment to exercise. I had dumbbells weights on the truck to do so, or I took advantage of down time between loads to find gyms around the country, I have been a bodybuilder my whole life, and keeping in shape was always apart of my whole life. At 47 years old, I was about to embark on a life-changing event.

It was January 26th I had been trying to beat this cold / cough for a month now and it became worse to the point of affecting my air intake, My co driver and myself had went to the Carlisle hospital in PA and after brief care in the ER, the chest X-rays came back negative basically they told me I did not have pneumonia and they gave me an inhaler for temporary comfort, saying I should feel better in about three days. Boy was he wrong! He even had said that the cold air will be good for my lungs, so I thought nothing of the fact it was 10 degrees outside. As we finally made it back to the freezing truck we slept in the cold until morning when we left for our next load pick up.

I had been driving my shifts and my symptoms were getting worse. I recall talking to my wife and friends telling them I shouldn’t be driving as I was confused.  I was making the wrong turns as well as almost hitting structures, light posts and signs.  This was not me ! Then it happened and the following is all I could recall for the coming month. It was Friday, January the 29th and my co driver had taken me to the ER in Mason City Iowa, in which they induced me into an immediate coma, as my oxygen levels were below 80 percent. I had complete whiteout of both my lungs. The damage was similar to a lifelong smoker would have, yet I didn’t smoke.  My wife had arrived the next day from California. She was in shock as to the reality of my condition.  After only a brief time in the coma I was diagnosed with ARDS.  A condition we had never heard of.

My chances of surviving were below fifty percent and I wasn’t responding to the meds due to the damage to my lungs. This is still hard to accept being I’ve always taken care of my heath.

As the doctors made various attempts with cultures to identify the virus, they continued to be unsuccessful. Where did this come from you ask? We might never know.  I took a turn for the worse and the reality was the doctors told my wife that there is a good chance I might not survive. I can’t even imagine how she felt. To this very day it’s hard to talk about.

After four days and a brief moment where I took a turn for the better the doctors ordered a rotating bed which was to benefit the flow of meds through my lungs.  While waiting for this item I had taken a turn for the worse, and the doctor told my wife that she might want to start calling family and such as they were pretty confident I wouldn’t pull through. The doctor then told her to hold off and required the staff turn me into what my wife called the Superman position (my arms were extended out like I was flying).

This was to be the act that proved to safe my life, as it allowed the meds to penetrate the lower rear point of my lungs. I remember one of the nurses telling me at a later time that they have never administered that much medication to one human being, as it had the strength to drop an elephant. So at this point My Parents finally arrived;  I remember this brief moment clearly as I the first thing I heard was my mothers voice saying hello handsome! I felt like a newborn child would have at this moment, free of anything bad and filled with an overpowering sense of innocence.

I remember immediately the discomfort I felt of the trachea that was put in my throat so I could be assisted with my breathing. It was very uncomfortable and very hard to accept, but I was alive! This is all that mattered. The reality was that had lost all my motor skills, strength and I was not able to talk. The doctors wasted no time in starting the physical therapy. My wife had told the therapist at an earlier time that “if he wakes up,  you will not be able to keep him in this bed, you don’t know this man, he’s like Superman you’ll see!”

It was very tough for me not being able to talk, so I tried a chalkboard, however I wasn’t able to hold the chalk and if I managed to scribble something out it was not legible. I remember being helped out of the bed to the chair I was so weak.  I was so used to being so strong, heck I weighed 215 lbs and was lifting weights that weighed over 400lbs. When I was sick, even though had lost 70 lbs while in the coma I found it difficult to even lift a pencil! Talk about a reality check!

So just four days after waking up from this coma, my oxygen levels were up to 90- 94 percent. This was amazing and I was breathing on my own. I had learned to walk on my own, had most of my motor skills back, so they decided to take the trachea out. I tensed up but there was no need as I could breathe on my own. So I was moved out of the ICU onto a normal care floor, I stayed one night there and was released the next afternoon. Everybody in the Hospital was amazed to see me being discharged. I toured the ICU unit and met all those who where there from the beginning. Some of them didn’t think that I would make it as they’ve seen the percentages of those people that do not survive ARDS

After my recovery, the hospital said I’m their recovery story for 2014 and that leaving the hospital after such a tough battle was a miracle! To this day this all seems so surreal, like it never happened. It has changed my life and my health, forever. My lungs will always have the damage and I still am battling health issues from this terrible experience. As terrible as it was, it has forced me to look at my life in a different manner. I plan on helping the ARDS foundation in many ways. This second chance has made me really want to help to increase awareness and support for all those affected by this syndrome. Together we can fight this and help to fund research thereby lowering the odds of it being fatal and raise the percentages of survival.

Thanks to God and all the support and prayers for giving me this second chance at life and I will always be thankful! Thanks to the ARDS foundation for sharing my story and providing hope for myself and many others.