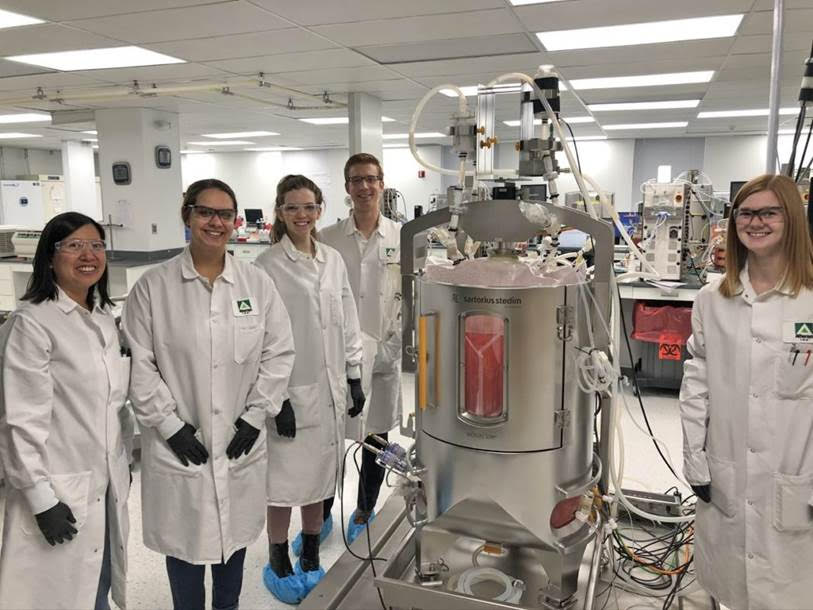 Athersys researchers involved in making MultiStem®, an adult-derived “off-the-shelf” stem cell product. Athersys says it is working as fast as it can to launch a pivotal trial of its in acute respiratory distress syndrome (ARDS), after the clinical program received the “Highly Relevant” designation for COVID-19 from the Biomedical Advanced Research and Development Authority (BARDA). [Athersys]
As COVID-19 coronavirus cases began to multiply in China in January, the Biomedical Advanced Research and Development Authority (BARDA) started reaching out to U.S. companies with diagnostics, vaccines, therapeutics, and other products it judged to have the greatest promise of fighting the virus. 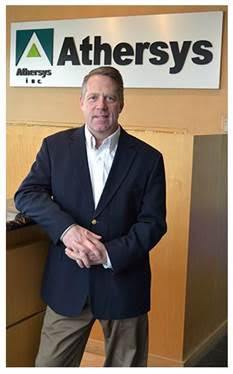 One of those companies was Athersys, the developer of a proprietary stem cell product called MultiStem®. The patented, adult-derived “off-the-shelf” therapy is under development for several neurological and cardiovascular diseases, as well as inflammatory, immune and related disorders—a category that includes acute respiratory distress syndrome (ARDS), the primary cause of death among COVID-19 infected patients.

In May 2019 at the American Thoracic Society International Conference in Dallas, Athersys presented positive 28-day clinical results from the exploratory Phase I/II MUST-ARDS trial (NCT02611609) showing improvement in ARDS patients compared to placebo in mortality, ventilator-free days, and Intensive care unit (ICU)-free days. The company announced additional positive one-year mortality and quality of life data in January.
Following a BARDA review supported by those positive early clinical trial results, plus the FDA’s Fast Track designation for the MultiStem clinical program in ARDS—the only Fast Track designation for an ARDS treatment—the company won BARDA’s designation as a “Highly Relevant” program for COVID-19.
Now, Athersys says, it is working as fast as it can to launch a pivotal trial of MultiStem.
“We’re actively working on the Phase III study design right now,” Athersys Founder, Chairman, and CEO Gil Van Bokkelen, PhD, told GEN. “We’re working as fast as we can on that because we want to sit down with the FDA—and BARDA will probably be involved in that conversation as well—so that we can all get on the same page about what we want to do next, and hopefully get it up and running as quickly as possible.”
Van Bokkelen said Athersys is looking at several possibilities for the Phase III trial: “One is that we run a traditional Phase III study for ARDS per se, and then we could either run a sub-study or an entirely separate study focused on COVID-19-induced ARDS. That’s something that we’re trying to sort out.”
Lower mortality
At the 28-day mark, according to results from the MUST-ARDS trial, 25% of patients receiving an intravenous administration of 900 million MultiStem cells (5 of 20) had died, compared with 40% of placebo patients (4 of 10). MultiStem patients showed better results than placebo patients in mean ventilator-free days (12.9 vs. 9.2), and ICU-free days (10.3 vs. 8.1)—and especially in median ventilator-free days (18.5 vs. 6.5) and median ICU-free days (12.5 vs. 4.5). 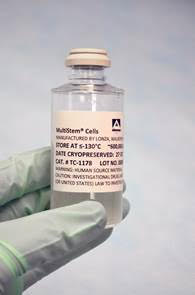 MultiStem®, an adult-derived “off-the-shelf” stem cell product, is under development for numerous indications that include acute respiratory distress syndrome (ARDS), the primary cause of death among COVID-19 infected patients. [Athersys]

Among more severe ARDS patients at the 28-day mark, mean ventilator-free days in the MultiStem subgroup was 14.6 vs. 8.0 in the placebo subgroup, while mean ICU-free days were 11.4 for MultiStem patients vs. 5.9 for placebo recipients.
The company on January 14 announced continued improvement in ARDS patients a year after MultiStem treatment, stating that Day-365 Quality of Life outcomes as assessed by the EQ-5D were meaningfully better for the treated group vs. the placebo group. Among patients with more severe ARDS, MultiStem treatment was associated with a markedly greater rate of survival and progression to functional independence at one year.
“Eighty percent of the patients that received a single dose of MultiStem within the first few days after being diagnosed with ARDS and being placed in a ventilator, by the time they get out either a few months or after the one-year mark later, they basically had complete independence in terms of self-care and all the things that are really meaningful,” Van Bokkelen said. “That compares to only 40% of the patients that were being treated under best available standard of care.”
“Perhaps just as importantly, among those patients that were treated with MultiStem, they were typically in the 90 to 95% range in terms of their own quality of life assessment on a zero-to-100 point scale—whereas the patients that were treated under best available standard of care, were typically in the 40 to 50% range,” he added. “What it told us, what it told the clinicians, and what it ultimately illustrated to BARDA and some of the other folks is, We’re not just moving the needle a little bit in terms of helping patients recover more quickly, and get off the ventilator, but we’re really changing the course of their recovery in a profound way.”
Off ventilators sooner
Van Bokkelen offered additional data from the trial: Among all patients in the study that were treated with MultiStem, 45% of those patients were off their ventilator within 7 days or less, compared with only 20% of placebo patients. 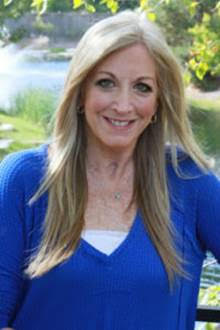 “If patients are on a ventilator for a shorter period, they will often suffer fewer complications through their entire hospitalization, and if they suffer fewer complications, their outcomes post ICU will be improved and ultimately, the goal will be a greater quality of life for those who get ARDS,” Eileen Rubin, JD, cofounder, president, and CEO of the ARDS Foundation, told GEN.
Athersys is also working with the Foundation to raise awareness of ARDS, which strikes some 2.2 million people worldwide annually (of which about 200,000 are Americans), with about 35% of patients dying from the disease and its complications. The foundation is a nonprofit focused on supporting patients and families dealing with the disease.
Rubin co-founded the Foundation after being hospitalized ARDS in 1995 at age 33; the only treatment she received besides supportive treatment was steroids. A few days after steroid treatment began, Rubin said, she was able to be taken out of her medically induced coma, though she remained on a ventilator until 8 weeks in the hospital, and suffered many complications until her discharge at 9 weeks.
Rubin emphasized that the ARDS Foundation has no role in the development of MultiStem, and has not worked on ensuring patient access to MultiStem.
“If their results in clinical trials continue to show the success that they have so far illustrated, there could be a likelihood that patients with ARDS will benefit from treatment with MultiStem,” Rubin added. “With more trials, we will learn more.”
Critical care focus
Developed from Multipotent Adult Progenitor Cells (MAPC®) obtained from the bone marrow of healthy, consenting adult donors, MultiStem is being developed in numerous critical care indications deemed to have substantial unmet need, high cost of care and quality-of-life burden & economic impact.
Therapeutic benefits of MultiStem include reducing inflammation by stimulating regulatory t cells and non-inflammatory M2 macrophages —of particular interest in fighting ARDS—as well as protecting damaged or injured tissue, and enhancing the formation of new blood vessels in regions of ischemic injury. MultiStem cells are typically stored frozen in a vial; once needed, they are thawed, then administered through a simple intravenous infusion. The cells can be prepared for the patient in less than one hour.
For MultiStem’s most advanced indication of ischemic stroke, Athersys is enrolling patients in the Phase III MASTERS-2 trial in the U.S. (NCT03545607) while collaboration partner HEALIOS is doing likewise for the confirmatory TREASURE study (NCT02961504) in Japan.
Other indications include four neurological conditions: hemorrhagic stroke, traumatic brain injury, multiple sclerosis, spinal cord injury; acute myocardial infarction; the cardiovascular
conditions peripheral vascular disease, also called peripheral arterial disease, which can develop into critical limb ischemia; prevention of Graft-Versus-Host Disease in patients undergoing allogeneic hematopoietic stem cell transplant; trauma, and solid organ transplant support.
By the time COVID-19 emerged, Athersys was familiar to BARDA, having previously worked on areas the company has not made public, but which Van Bokkelen said were directly relevant to BARDA’s mission of helping secure the U.S. from chemical, biological, radiological, and nuclear (CBRN) threats, as well as from pandemic influenza and emerging infectious diseases: “They already knew who we were, and frankly they already had a good sense of what our technology is capable of. So, I think that kind of facilitated the conversation in some important ways.”
Also attractive to BARDA, he added, is the fact MultiStem is not pathogen specific, so the agency would not need to stockpile it and worry about it expiring within a given timeframe.
“If you can eliminate that logistical problem for them, while you’re illustrating broad relevance for them in other therapeutic areas, and provide them with the clinical evidence and the mechanistic evidence to really substantiate all those things, as we have done, that puts us in a very, very strong position,” Van Bokkelen said.
By Laura Donelli| 2020-03-26T17:51:51-05:00 March 26th, 2020|Medical Websites & Articles|Comments Off on Athersys Stem Cell Therapy Targets Top Cause of COVID-19 Deaths