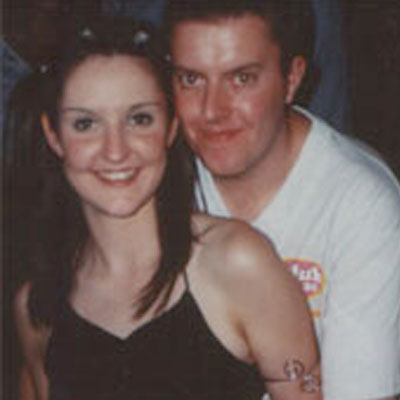 Christmas had always been a special and magical time for Suzanne, it had always been a chance to return to an innocent child like status and become truly captured in the magic of Christmas. At first, this Christmas seemed no different to other years. Granted, there had been struggles… Russell’s father’s death in late July, the purchase of a house, and the fact the work was extremely busy for both. Suzanne was so involved with work, she was too busy to notice her partner becoming gradually sicker and sicker.

At first, twenty-six year old Russell seemed to just have a chest infection that would clear up with some cold relief. Russell, a Head Chef would not take time at this his busiest time of the year. When the chest infection wouldn’t clear up, Russell was prescribed antibiotics for suspected pleurisy; but still, he continued to work. On December 17th a week before Christmas, Suzanne talked Russell into going to the doctor; the doctor ordered a chest x-ray and the following day, he was admitted to Hospital.

Russell assured Suzanne that he would be better in a few days. But a few days came and went. Russell was not getting better. Instead, he was admitted to the infectious diseases ward, where he endured endless tests, without a diagnosis. Finally, on December 23, the doctors decided to do a lung biopsy the next day. The surgeon explained the procedure, that they would collapse the lung, Suzanne let out a scream. The surgeon told them they need not worry as it is a routine procedure. Russell was transferred to the Northern General Hospital for the biopsy. By this time, Russell has become extremely breathless and Suzanne was very frightened.

The nursing staff could see Suzanne’s distress and they quickly arranged a relative’s room for Suzanne so that she could stay in the hospital overnight. Christmas Eve, Russell had his lung biopsy. Everything proceeded as planned. Suzanne was able to see Russell in recovery, and was so pleased to see that Russell was sat up laughing and joking and looked amazingly well for someone just out of theatre. The Doctors debated whether Russell should go to ICU or to a regular ward.

To be safe, Russell went to the intensive care unit. A few hours later after eating jelly and ice cream, the Sister came in and said that they would be transferring Russell to the high dependency unit as other patients were much more sick than Russell. Russell continued to improve and was transferred to a regular ward.

It was at that point that the horrible nightmare, the one that seems like it will never go away, began. On Boxing Day morning, Russell’s lung collapsed and he was screaming in agony. His epidural had come out and they were unable to administer any pain relief. The nurse tried to contact the doctor, but he was treating a patient with a gun shot wound and they would have to wait for twenty minutes. After twenty minutes of agony, Russell had a chest tube inserted. Things continued to get progressively worse; Russell was transferred back to the intensive care unit. Further he now appeared to be drifting in and out of consciousness. The doctors told Suzanne that the results of the lung biopsy indicated viral pneumonia as they had found two types of viruses, Staphylococcus, Influenza type A, Meningitis together with Glandular Fever although they were not sure if this was residual.

Now back in Intensive Care, Russell looked awful; he had tubes coming out from everywhere and he was a grayish blue colour. His eyes were taped down and skin stained with iodine. Two chest drains bubbled furiously by his side. The Doctor’s said that they would wake him up the next day. The next day didn’t come for some months later.

Russell was diagnosed with ARDS (Acute Adult Respiratory Distress Syndrome). Russell was now completely sedated and on 100% oxygen and full support from the ventilator. Paralyzing drugs meant that he couldn’t move a muscle. The Doctors and nurses both said that he was very close to dying. A few days later, Russell was placed on a rotation bed and moved into isolation; now he had the hospital super bug: MRSA. The next major problem … on New Year’s Eve, Russell’s lung collapsed.

On January 15th, a day Suzanne calls “Black Thursday,” Russell had been unstable all night, with a heart rate of 170 and despite being on 100 & oxygen and full support from the ventilator, they were struggling to keep his vital statistics up. Suzanne was told that there was nothing else they could do. Russell’s mum took her rightful place at the bedside and Suzanne’s Aunty and the local Curate came to be with her.

The doctors said that the only thing left was to try prone positioning, turning Russell face down, although this did not come without its risks. Unfortunately, when they tried this, there was no sign of improvement. The family stayed by his bedside and prayed and again God was listening and at 3 in the afternoon, Russell’s vital signs were improved although not stable.

As the days turned into weeks and then months, Russell went from one crisis to another. Many prayers were said, up and down the country. This is where the saying: “candles at nine” came from. Each Sunday night at nine o’clock, Suzanne would ask friends, religious or not, to light a candle and hold Russell in their thoughts and prayers. It was such a support to know up and down the country candles were lit for Russell. On many occasions during those darkest days, Suzanne felt the experience of being held. God was listening to their prayers.

Russell suffered six pneumotharax’s (lung collapses) in all and had a total of six chest drains. A tracheostomy was performed so that he could be ventilated long term. The x-rays got progressively worse and showed a complete white out of his lungs due to all the infections. Russell had pseudomonas and candida, serious gram negative bacteria infections amongst others. He developed septicemia on four or more occasions.

Sometimes Suzanne feared she would never see him again. Finally, in late February, they attempted to wake Russell. Suzanne was told to prepare herself… Russell might be severely brain damaged, they said, due to the amount of time he had been hypoxic (without oxygen).

When Russell awoke, he could not speak or move. Two days later, after becoming septic, he was put back to sleep again. He had a temperature of 104 degree requiring blood transfusions, supportive medication to keep his blood pressure up, and a course of antibiotics costing 10,000 a shot.

In early March, Russell was awoken again. They began to wean him from the vent but this proved difficult and took several months, a lot of encouragement and countless prayers.

During the time Russell was in hospital, the love and support of the chaplaincy team was endless. Some of the darkest days Suzanne would not have been able to get through had it not been for their support. Russell’s illness brought with it a new sense of faith, which Suzanne further explored and led to my confirmation in June. Russell amazed Suzanne by being able to be present and it was once of the most special days of her life which will be forever etched on my heart.

The Doctors continued to say that they would try until the situation became hopeless. Even though three times Russell was declared nearly dead or hopeless with a less than 5% chance of survival, Russell did what was seen as the impossible: he survived ARDS!

He spent a total of 5 months in intensive care on a ventilator before being moved to the acute spinal injuries ward for rehabilitation where he spent another two months. He had to learn to do everything for himself again, how to take a drink from a beaker, how to dress himself and how to walk.

Now out of hospital, Russell wears a splint on his left leg as he has no feeling due to critical illness neuropathy, he is on supplementary oxygen 24 hours a day. His weight is down and fortunately, he has no memory of his time in CICU, although both Suzanne and Russell suffer with flashbacks from his time in intensive care.

In July, 2004, Suzanne and Russell celebrated Christmas in their new home in Sheffield, South Yorkshire; they put the tree up and opened their presents from December. Family were in attendance and it was very emotional and cathartic.

Suzanne and Russell are still coming to terms with the events of the last few months. And although each day brings a new challenge, Suzanne knows that it is a miracle that Russell is still with them. She is in awe of his determination to fight this syndrome and get better. Russell is being considered for a lung transplant but he is adamant that given more time he can get better.

Russell and Suzanne still have a long way to go, so still need thoughts and prayers. But Suzanne wants others to know that “each day many people face devastating news and have to face up to horrible and soul destroying illnesses such as cancer, leukemia and others. My heart goes out to each and every one of them. Perhaps people reading this now have loved ones or they themselves are facing illness. My message is: “Never give up hope, the greatest gifts we have are faith, love and hope and with these anything is achievable. “